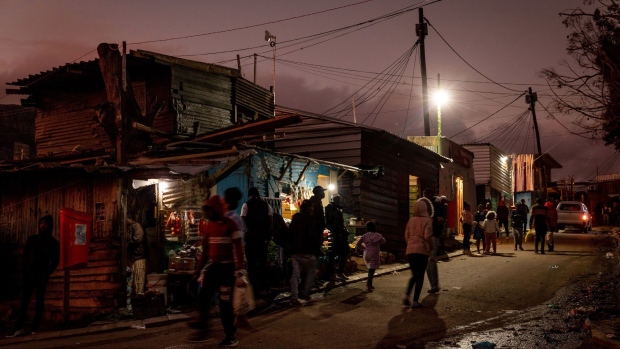 Electrical power lines above stores in the Imizamo Yethu informal settlement in the Hout Bay district of Cape Town, South Africa, on Wednesday, Aug. 3, 2022. South Africa's state-owned power utility Eskom Holdings SOC Ltd. warned it may have to implement rolling blackouts for the first time in more than a week due to a shortage of generation capacity. , Bloomberg

Stage 3 interruptions, meaning 3,000 megawatts are removed from the grid, will run from midnight on Sunday to 4 p.m. Monday and then daily until Thursday.

“While we expect diesel deliveries from Tuesday onwards, should this uncertainty of supply persist, higher stages” of power cuts may be needed, it added.

Eskom will increase the power supply to 4,000 megawatts daily during evening peaks from 4pm to midnight until Thursday. It plans an update Wednesday afternoon “as soon as there are significant changes.”

Small businesses are struggling to operate in the face of crippling power cuts, which leave many workers idle during black-outs, according to the lobby group that represents 8,000 members.