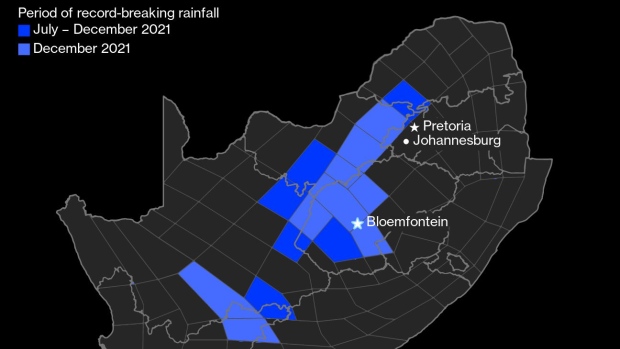 Many districts across six of the country’s nine provinces experienced the most rainfall on record since tracking by district began in 1921. That includes the main belt for growing corn, of which South Africa is the biggest exporter on the continent. The government has declared a national disaster, a legal designation that will help unlock financial and humanitarian aid, citing death, flooding and infrastructure damage.

Heavy rains were expected this season because of La Niña, which affects ocean currents and usually results in above average rainfall in southern Africa. But the severity of rain, just a few years after some of the worst droughts on record, underscores the unpredictability of weather as the accumulation of greenhouse gases in the atmosphere alters the Earth’s climate.

“We view it on our side as a bigger phenomenon of the climate change story,” said Wandile Sihlobo, chief economist of the Agricultural Business Chamber of South Africa. “These massive rainfalls, we haven’t seen this in the recent past in South Africa.”

Rain has poured down across the western Free State and much of North West province, according to data provided by the South African Weather Service. One district in Limpopo province received 390 millimeters (15.4 inches), almost four times its 30-year average for December, while other districts saw more than double their average rainfall over the last six months.

“This is exceptional, it’s by no means normal,” said Liesl Dyson, a meteorologist at the University of Pretoria. “You see floods all over the place.”

The extreme and unpredictable weather has made life more difficult for farmers and policy makers. The Karoo, a semi-desert region that stretches across three provinces — the Northern, Eastern and Western Cape — has turned a lush green this year, a stark contrast to its usual sparsely vegetated, rock-strewn landscape. As recently as 2020, farmers in part of Karoo were recording their lowest-ever rainfall and bracing for more hot and dry seasons.

Reservoirs across the country including the Vaal Dam, which supplies Johannesburg with water, are overflowing when just a few years ago there was concern that supplies could be imperiled by a lack of rain.

This is the third year of heavy seasonal rainfall, meaning that high soil moisture levels are causing significant runoff and leading to floods, according to Sihlobo from the Agricultural Business Chamber. He said that has led to damage to crops in some areas and planting delays in others.

The extent of the impact from those waterlogged fields will likely be seen on Jan. 27 when South Africa’s first assessment of summer crop planting is released.