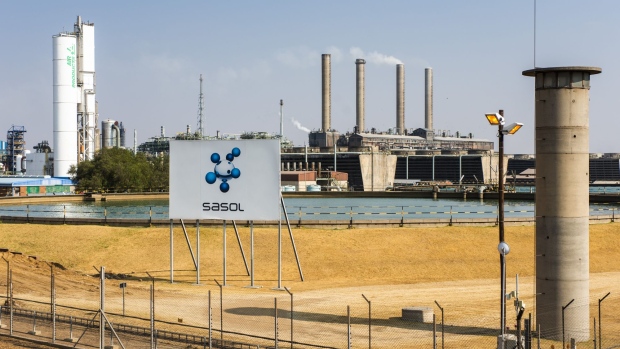 Emissions rise from towers at the Sasol Ltd. Sasol One Site in Sasolburg, South Africa, on Wednesday, Aug. 7, 2019. Sasol said some of its South African plants are under threat from sulfur dioxide emission standards that it will need to comply with by 2025. Photographer: Waldo Swiegers/Bloomberg , Bloomberg

(Bloomberg) -- South Africa’s economy will face a gas-supply price hike by Sasol Ltd. that will add about 325 million ($20 million) a month to the cost, according to an association of users of the fuel.

“The current gas pricing uncertainty holds risk” for the biggest buyers, the Industrial Gas Users Association of Southern Africa said in a statement Wednesday, referring to a 96% price increase that took effect Aug. 1.

Sasol delivers gas produced in Mozambique through the Rompco pipeline to its own operations and consumers. South Africa otherwise lacks significant gas production and alternative means to import the fuel.

All energy prices have been rising, though Sasol’s profit margin after its move is significant, said Elize Kruger, a Johannesburg-based independent economist. “It is indeed a hefty increase.”

The National Energy Regulator of South Africa last week said it had been alerted to “imminent excessive increases in gas prices” by one of its licensees, which it didn’t identify, and would investigate any unreasonable pricing.

“Sasol Gas recognizes the impact of the increase in prices on customers,” the company said in an emailed statement responding to the regulator. The price was determined by using a methodology approved by Nersa, it said.