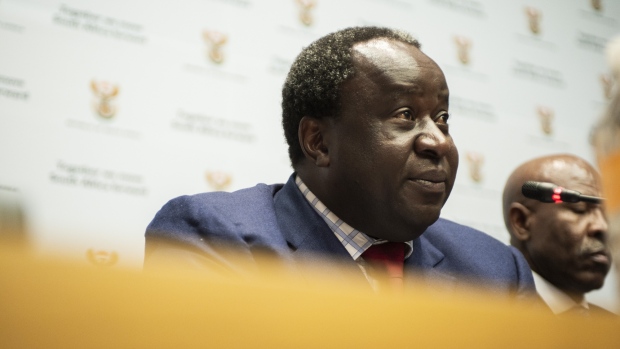 (Bloomberg) -- South African Finance Minister Tito Mboweni is awaiting responses to his economic policy plan, but so far reaction from the public has been slow, he said.

“You are saying some things are missing from the document. I am very happy they are missing,” so that South Africans can make proposals, Mboweni said at a conference hosted by the Banking Association of South Africa in Johannesburg Friday.

The response from the public in general as well as organized business and labor had so far been poor. “The largest number of people that have responded are editors of newspapers -- I have not received anything from Sanco, Cosatu and the SACP,” he said. “What is being called the Chamber of Mines is quiet, the South African Chamber of Commerce and Industry is quiet. There’s a lot of noise and no contact. So do write. This is an open invitation.”

Mboweni’s plan, the details of which were released Aug. 27, envisions the state relinquishing its near monopoly of electricity, port and rail services, relaxing rules to make it easier to do business and privatizing assets to stabilize its finances. He also favors maintaining a flexible exchange rate, inflation targeting and sustainable fiscal policy.

The Congress of South African Trade Unions, alliance partner of the ruling African National Congress, said at a press conference two weeks ago the measures in Mboweni’s plan were an attempt to push through a “right-wing agenda” and that it makes the government appear incoherent, confused and unreliable.

Mboweni said he understood Cosatu opposing his plan. “Some of them spoke before reading the document. So instead of dealing with the content of the document they were dealing with process, and that’s not helpful,” he said. “Hopefully by the 15th of September they will have submitted their comments.”

Pressure should not be put on South Africa’s banks to provide funding to unsustainable activities, he said. “If these banks begin to carry on their books unsustainable debt that is not serviced regularly, and these banks fall into distress, who is going to bailout these banks? National Treasury?”

South Africa must focus on growth-enhancing activities including agriculture and manufacturing and encourage further exploitation and development of the mining sector, he said. The country must also continue to focus on fixing state-owned Eskom Holdings SOC Ltd.

To contact the reporter on this story: Roxanne Henderson in Johannesburg at rhenderson56@bloomberg.net

To contact the editors responsible for this story: Alastair Reed at areed12@bloomberg.net, Jacqueline Mackenzie, Rene Vollgraaff