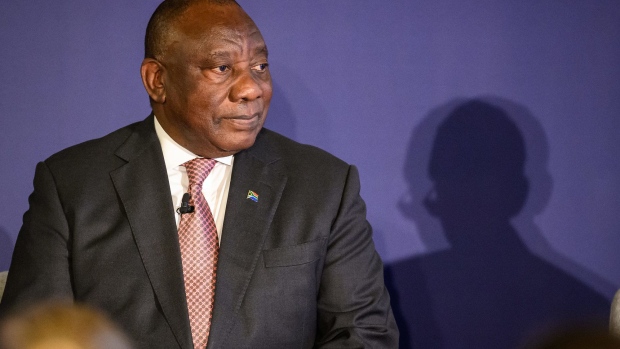 (Bloomberg) -- South Africa’s main opposition parties want President Cyril Ramaphosa to be subjected to impeachment proceedings after an advisory panel found he may have breached the constitution, leaving him reliant on the governing African National Congress to shield him from a parliamentary probe.

The panel headed by Sandile Ngcobo, a former chief justice, issued a scathing assessment of Ramaphosa’s handling of the theft of at least $580,000 that had been stuffed into a sofa at his game farm, and recommended that lawmakers consider censuring him. The National Assembly will decide on Dec. 13 whether to adopt the report and set up its own inquiry, a vote that needs a simple majority to pass.

The Democratic Alliance, Economic Freedom Fighters, Inkatha Freedom Party and Freedom Front Plus, which together control 152 of the 400 seats in the legislature, on Thursday all said they will vote in favor of approving the panel’s findings. The ANC has instructed its 230 legislators to block the report, but not all of them support Ramaphosa and some could vote alongside the opposition. An open ballot will, however, serve as a deterrent to those considering breaking ranks.

“It is better for the president to explain himself now, rather than this hanging over his head as an unresolved matter ahead of the 2024 elections. He brought it on himself,” said Siviwe Gwarube, the DA’s chief whip in parliament. “He must answer for this issue properly.”

Ramaphosa, who took office almost five years ago, has consistently denied wrongdoing or breaking his oath of office, and has filed a lawsuit with the nation’s top court to have the panel’s findings overturned. He intends seeking a second term as ANC leader at its five-year elective conference that gets under way on Dec. 16. If he wins, he would automatically be the party’s presidential candidate in the 2024 vote.

‘’We believe that President Ramaphosa jumped the gun by filing an application with the court, as he would still have had an opportunity to challenge the findings” of the panel as part of the parliamentary process, said Narend Singh, the Inkatha Freedom Party’s chief whip.

Nkosazana Dlamini-Zuma, the cooperative governance minister who Ramaphosa narrowly defeated in the ANC’s last internal leadership vote, and party lawmaker Mervyn Dicks have both said the president should quit. It’s unclear how many others in the party share that view. Impeaching the president will require the backing of two-thirds of lawmakers.

Ramaphosa won’t necessarily be off the hook even if the ANC does thwart a parliamentary inquiry. The police are also investigating the farm robbery and he’ll be forced to step down if they lay criminal charges against him.