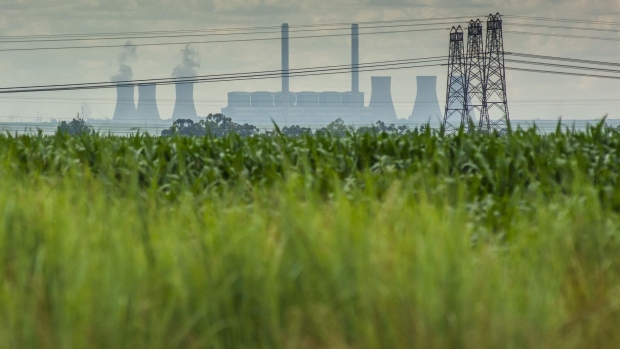 Electricity transmission pylons near the Komati coal-fired power station, operated by Eskom Holdings SOC Ltd., in Mpumalanga, South Africa, on Tuesday, Jan. 12, 2021. In South Africa, for decades almost all the electricity needed to power Africa’s most industrialized economy has been produced by a fleet of aging coal-fired plants constructed alongside the mines to the east of Johannesburg. , Bloomberg

Eskom Holdings SOC Ltd. Chief Executive Officer Andre de Ruyter laid out a funding plan to help the company, which generates the bulk of South Africa’s power from coal, transition away from the use of the dirtiest fossil fuel.

De Ruyter said the company is proposing a multi-lender loan facility from development finance institutions that would be paid out in segments over a number of years. Mandy Rambharos, the head of Eskom’s just energy transition department, has previously said the transition could cost $10 billion.

The utility is considering 8,017 megawatts of projects, ranging from wind power to solar, hydropopwer and gas, he said in a presentation to the Presidential Climate Commission on Friday. The Komati coal-fired power plant will be the first to be converted away from the fuel and serve as a pilot project for the conversion of a number of other facilities.

In a separate presentation, Deputy Finance Minister David Masondo said there were a number of ways to resolve Eskom’s 400 billion-rand ($27-billion) debt burden, including asking for debt forgiveness at the sovereign level in exchange for meeting climate goals. An equivalent amount would then be given to Eskom as an equity injection, he said.

Other options include listing the company on a stock exchange or inviting foreign utilities to take a stake. Masondo said he isn’t in favor of shifting a portion of Eskom’s debt onto the state balance sheet or putting it in a special-purpose vehicle.

The proposals aren’t the views of the National Treasury, he said.

(Updates with details on plans, Masondo’s comments throughout)