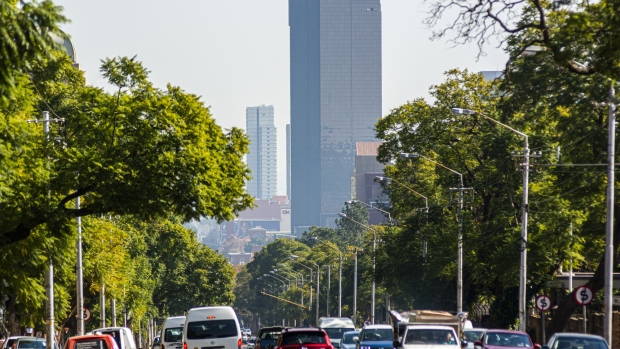 (Bloomberg) -- The South African Reserve Bank’s ability to cut interest rates to boost the economy is limited by political and policy uncertainty and inflation that’s still not sufficiently anchored at the midpoint of its target range.

Investors pay a premium for South African debt to compensate for the risk of holding it and this constrains monetary policy by raising the interest rate needed to stabilize inflation, the central bank said in its bi-annual Monetary Policy Review on Tuesday. That’s partly due to deteriorating fiscal metrics caused by bailouts for state-owned companies such as Eskom Holdings SOC Ltd.

While price growth has shifted close to the middle of the band of 3% to 6%, expectations remain above 4.5%, suggesting that the rate has not yet been anchored at the midpoint, according to the Reserve Bank.

“Were inflation lower, the repo outlook could be more accommodative,” it said. “If the sovereign risk premium were to come down, the neutral rate would moderate and monetary policy would enjoy more space. However, even a significantly more expansionary repo stance would very likely not deliver growth rates adequate to South Africa’s challenges, given acute constraints elsewhere in the economy.”

Business groups and the Reserve Bank have urged the government to implement structural reforms. The National Treasury published a policy paper in August proposing a raft of steps that could increase the average economic growth rate by 2.3 percentage points and create more than a million jobs over a decade.

Several of the ruling African National Congress’s alliance partners have rejected it.

“There are risks a change in the environment could force an outright-tight policy stance,” the central bank said. “To control these risks, South Africa needs reforms. These are likely to entail some short-term pain. The cost of postponing reforms further, however, is rising.”

Finance Minister Tito Mboweni will present the mid-term budget on Oct. 30 and is expected to confirm a larger shortfall than projected in February after an additional 59 billion rand ($3.8 billion) bailout for Eskom. Investors are cautious of fiscal dynamics, with long-run sustainability coming in to question, the Reserve Bank said.

Slowing wage growth, weak expansion in the tertiary sector and trade surpluses due to less imports show the economy has a shortage of demand. GDP will probably expand 0.6% this year and the potential growth rate has fallen to about 1%.

The Monetary Policy Committee left its benchmark rate at 6.5% last month after a 25 basis-point cut in July. Its quarterly projection model points to the rate being unchanged until the end of 2021.

While weak demand should respond to interest-rate adjustments, policy uncertainty is a “problem larger than monetary policy,” the central bank said. Business confidence is at the lowest level in more than three decades and an index measuring sentiment in the manufacturing sector fell to the weakest since August 2009 last month.

“Where monetary policy enjoys margin for maneuver, weak demand is a problem that can be addressed with interest rates,” it said. “Supply-side shocks and policy uncertainty, however, are beyond the reach of the Reserve Bank.”

To contact the reporter on this story: Rene Vollgraaff in Johannesburg at rvollgraaff@bloomberg.net

To contact the editors responsible for this story: Benjamin Harvey at bharvey11@bloomberg.net, Gordon Bell