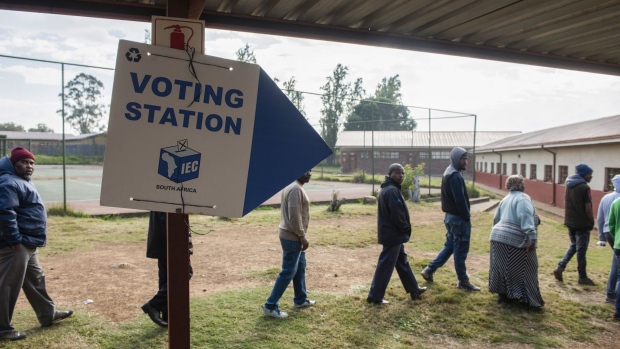 People queue to make their way inside a polling station during the general election in Soweto, South Africa on Wednesday, May 8, 2019. While opinion polls point to the ruling African National Congress extending its quarter-century monopoly on power in Wednesdays vote, South African President Cyril Ramaphosa needs a decisive win to quell opposition in his faction-riven party to push through reforms needed to spur growth in Africas most-industrialized economy. , Bloomberg

(Bloomberg) -- South Africa’s African National Congress was voted out of power in the southern Nelson Mandela Bay municipality, leaving the ruling party in control of only three of the nation’s eight biggest urban areas.

A group of opposition councilors pushed through a no-confidence vote in ANC Mayor Eugene Johnson, and replaced her with Retief Odendaal from the Democratic Alliance, the country’s second-biggest political party.

The municipality is the main economic hub in the coastal Eastern Cape province. It has been battling a water crisis, with dam levels reaching critically low levels following a severe drought.

The ANC, led by President Cyril Ramaphosa, suffered its worst electoral performance in a local government vote last year, winning less than 50% support for the first time since coming to power in 1994. Opposition coalitions now manage most of South Africa’s key cities, including Johannesburg and the municipality that includes the capital, Pretoria.

Power has changed hands several times in Nelson Mandela Bay since the ANC first lost its outright majority in the city in 2016.