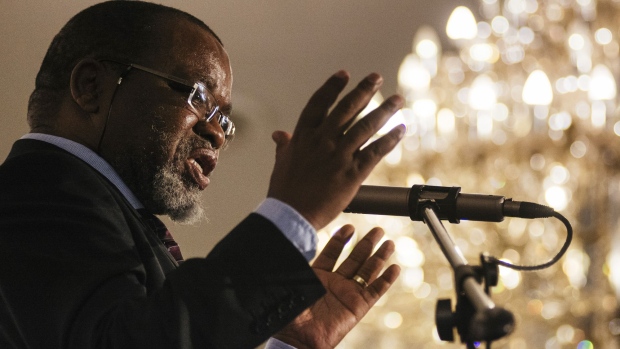 (Bloomberg) -- Senior members of South Africa’s ruling African National Congress blamed a range of factors outside their control for an electricity crisis that one major ally said is likely to cost the party victory in next year’s elections.

Energy Minister Gwede Mantashe told a meeting in Johannesburg that the national power utility, Eskom Holdings SOC Ltd., isn’t showing the required urgency to improve its coal-fired plants and an emergency-procurement program has been scuppered by lawsuits.

Public Enterprises Minister Pravin Gordhan added that Eskom, which he oversees, has suffered a series of mishaps and is hobbled by corruption.

The ANC has come under increasing pressure to resolve South Africa’s electricity crisis after more than two decades of indecision, graft and political interference reduced Eskom to a dysfunctional entity reliant on government handouts. The country has suffered 87 consecutive days of zonal blackouts, known locally as loadshedding, often for 10 hours or more a day.

“No party can survive loadshedding for 10 hours a day,” Matthew Parks, parliamentary coordinator for the Congress of South African Trade Unions, a key ally of the ANC, said at the event Wednesday. Eskom hasn’t had the government support it needs to force municipalities to pay their arrears to the utility, he said, nor from security agencies in cracking down on looting.

The ANC has led South Africa since the end of apartheid in 1994. In municipal elections in 2021, its share of the vote fell below 50% for the first time.

The power cuts are straining the finances of the nation’s biggest cities as the hit on economic growth reduces tax income and maintenance budgets surge because of breakdowns of electricity-distribution equipment because of the outages.

“This is not the work of amateur criminals, but it is criminality committed by highly armed and resourced syndicates,” she said.

Mantashe, who stressed the ruling party didn’t actually run power plants, listed four things that needed to be done to end outages within six to 12 months. Eskom has said it needs two years to alleviate, rather than end, the blackouts.

The minister said Eskom needs to show more urgency in repairing its plants and hire more skilled employees, while extra power should be imported from neighboring countries. He also bemoaned the disruption of an emergency program by lawsuits and environmental complaints levied against Karpowership, a Turkish operator of ship-mounted plants that was supposed to supply 1,220 megawatts.

“Karpowership was taken to court by everybody,” he said. “It was an emergency solution, cheaper than loadshedding.”

Work is under way to speed up the recovery of Eskom’s plants but “the level of corruption is huge,” Gordhan said. He insisted the government is working with urgency and urged all South Africans to do what they can to ease the crisis.

“Yes, this is a tough period we are going through,” he said. “Government is aware of that.”

(Updates with comments from Johannesburg mayor from seventh paragraph)