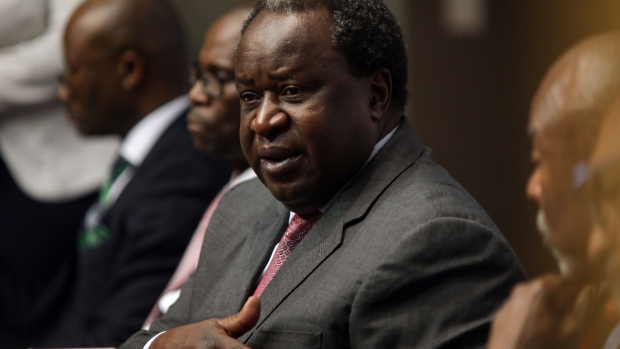 Tito Mboweni, South Africa's finance minister, speaks during a news conference before he presents his budget to parliament in Cape Town, South Africa, on Wednesday, Feb. 26, 2020. Moody’s Investors Service in November gave Mboweni just under four months to come up with a credible plan to rein in government debt and get the economy growing. , Bloomberg

The resignation of Mboweni, 62, was announced by Ramaphosa Thursday on state television. It follows months of speculation about his position in the government after he said he would favor a return to the private sector.

The former central bank governor, whose appointment to the post sparked a financial-market rally is 2018, is popular among investors for his strong stance on reining in government spending, cutting public-sector wages and support for loss-making state-owned companies, and selling some state assets.

Mboweni was brought in as a stop gap measure after then-Finance Minister Nhlanhla Nene abruptly resigned.

“It was never intended that I was going to be here for too long,” Mboweni said in an interview with Bloomberg last week. “In fact, I think I have been here for far too long.”