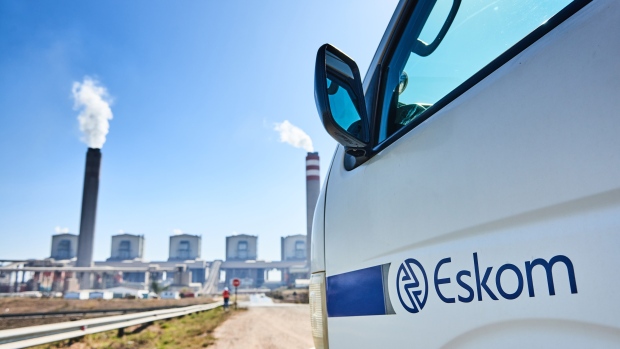 A corporate vehicle outside the Kusile coal-fired power station, operated by Eskom Holdings SOC Ltd., in Delmas, Mpumalanga province, South Africa, on Wednesday, June 8, 2022. The coal-fired plant’s sixth and last unit is expected to reach commercial operation in two years, with the fifth scheduled to be done by December 2023. Photographer: Waldo Swiegers/Bloomberg , Bloomberg

(Bloomberg) -- South Africa’s National Treasury is seeking to hire a legal firm to advise it on how to reorganize the 396 billion rand ($24 billion) debt burden held by national power utility Eskom Holdings SOC Ltd., people familiar with the situation said.

A request for proposals from the firms was issued recently, according to one of the people. It comes as the department continues with technical work it began in March on how to deal with the debt that’s left the utility reliant on state handouts to survive. Eskom doesn’t earn sufficient revenue to cover its running costs and interest payments, and the company has subjeced the country to intermittent power outages since 2008 because it can’t meet demand. The people asked not to be identified as a public statement has not been made.

The development may indicate more urgency by the South African government to resolve the crisis at Eskom, which is holding back the economy and damaging the popularity of the ruling African National Congress. The country is currently experiencing its worst-ever power cuts, with as much as 6,000 megawatts being shed from the national grid, after a pay strike halted some of its plants and interrupted maintenance.

The crisis, which has resulted in a drumbeat of negative news reports and headlines, is causing divisions within the government. Gwede Mantashe, the energy minister, has absolved himself of blame, while Pravin Gordhan, the minister of public enterprises, told the News24 website that the government should cut “the damn red tape” to get more privately owned power generation units online.

The Treasury didn’t immediately respond to a request for comment.

Eskom Chief Executive Officer Andre de Ruyter has said the company would only be sustainable if its debt is reduced to 200 billion rand.  The government has previously considered the option of moving a portion of Eskom’s debt onto the sovereign balance sheet -- a decision that would need to be made by Treasury and then approved by the cabinet.