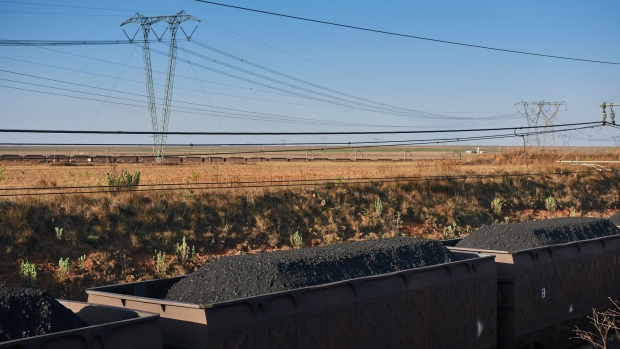 Freight wagons transport coal past electricity transmission towers, heading from the Mafube open-cast coal mine, operated by Exxaro Resources Ltd. and Thungela Resources Ltd., towards Richard's Bay coal terminal, in Mpumalanga, South Africa on Thursday, Sept. 29, 2022. South Africa relies on coal to generate more than 80% of its electricity, and has been subjected to intermittent outages since 2008 because state utility Eskom Holdings SOC Ltd. can't meet demand from its old and poorly maintained plants. , Bloomberg

(Bloomberg) -- South Africa has submitted to some of the world’s richest nations a revised plan for how it will spend a proposed $8.5 billion to help it transition away from coal, two people familiar with the situation said.

The new draft -- sent to funding partners the UK, US, France, Germany and the European Union -- advances a process that’s been mired for almost a year in complex negotiations. The people, who asked not to be named because talks are ongoing, declined to give any detail on what the ammendments involve.

South Africa’s landmark climate finance deal, unveiled at last year’s UN-led talks in Glasgow, was hailed as a prototype for helping other coal-dependent developing countries transition to cleaner energy. Its fate could have a knock-on effect at next month’s COP27 summit in Egypt, which is set to focus on the needs of poorer nations adapting to global warming.

A detailed agreement on how the funds will be apportioned is key to securing their release, with donors focused on repurposing coal-fired plants owned by state utility Eskom Holdings SOC Ltd. to produce renewable energy. South Africa is pushing for support to develop green hydrogen and electric vehicle production.