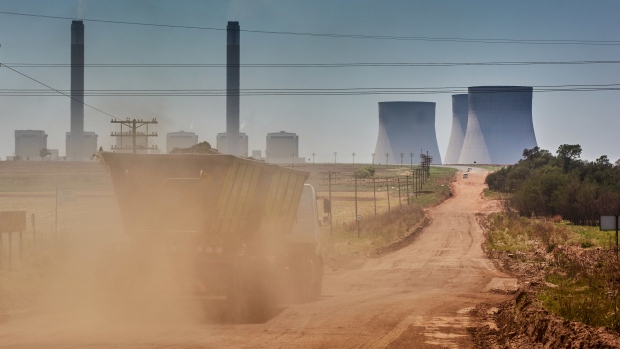 A coal delivery truck drives along a dirt road towards the Eskom Holdings SOC Ltd. Kendal coal-fired power station in Mpumalanga, South Africa, on Friday, Oct. 15, 2021. Envoys from some of the world’s richest nations met with South African cabinet ministers to discuss a climate deal that could channel almost $5 billion toward ending the country’s dependence on coal. , Bloomberg

South Africa will develop a green investment plan of as much as $500 million, representing a fraction of what’s needed, to fund its energy transition away from coal.

The allocation of at least $200 million would come from the Climate Investment Funds, including a $1 million grant to draft the plan, Environment Minister Barbara Creecy told reporters in the capital, Pretoria, ahead of the COP26 climate talks to be held in Glasgow later this month. The initial amount from the CIF’s Clean Technology Fund “can leverage additional blended finance” from development banks with a multiplier of three or four to one, she said.

The country is the world’s 8th-largest emitter of greenhouse gases and offers a major opportunity to shift from burning coal to generate the bulk of its electricity to using clean energy technologies.

Eskom Holdings SOC Ltd. the nation’s main power producer and the world’s biggest emitter of sulfur dioxide, is central to the government’s investment plan that also involves a hydrogen strategy and electric vehicles. But with the state-owned utility making losses and stuck beneath unsustainable debt, it also needs financing to make the transition. It has outlined about 400 billion rand ($27 billion) needed to build generation to replace coal stations as well as transmission and distribution infrastructure.

“What’s on the table at the moment is small” and additional funding including grants will be needed for South Africa to achieve such an undertaking, Creecy said.

Earlier this month, envoys from some of the richest nations visited South Africa to discuss a potential deal toward ending its reliance on coal ahead of the COP26 meeting. The most industrialized nation on the continent will join others in Africa to call “for a common definition of climate finance, and accounting modalities as well as realistic, predictable and ambitious support” balanced between mitigation and adaptation, Creecy said.

The minister watered-down expectations around the summit to be mainly an opportunity to explain the challenges faced by the country. “We don’t expect that at Glasgow anyone is going to be there with their checkbook,” she said.

In the meantime, Creecy said she’s reiterated with Eskom and petrochemicals manufacturer Sasol Ltd., the nation’s biggest polluters, that emission limits will be enforced. “We are not going to be giving exemptions.”