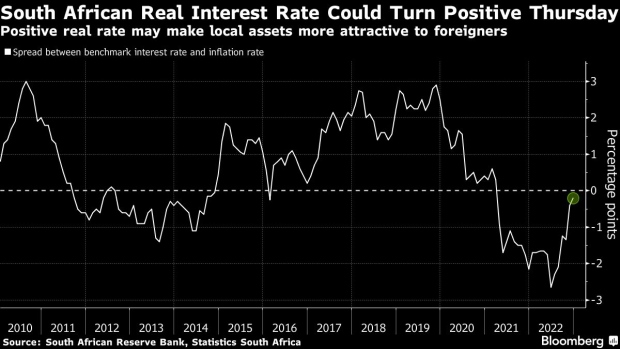 (Bloomberg) -- South Africa’s central bank is set to moderate its most aggressive interest-rate hiking cycle in at least two decades Thursday, and economists and traders will be on high alert for any signs of a pivot away from policy tightening.

The median expectation of economists in a Bloomberg survey is that three members of the monetary policy committee will vote in favor of a 50 basis-point hike, and the other two for a quarter-point increase. The panel has lifted borrowing costs by 75 basis points in each of its last three meetings.

The South Africa Reserve Bank typically moves in increments of 25 basis points, and another increase would take the benchmark repurchase rate to the highest level in almost 14 years. It would also result in a positive real interest rate, potentially making local assets more attractive to foreign investors and creating room for the MPC to start thinking about ending the hiking cycle.

The MPC under Governor Lesetja Kganyago has frontloaded its fight against inflation: At 7%, the key rate is already higher than the year-end 2025 level that its quarterly projection model suggests it should be. Economists in a separate Bloomberg survey see the key rate peaking at 7.5% by the end of this quarter, with a gradual easing of borrowing costs starting in the fourth quarter.

While major global central banks are expected to down-shift or even pause their hiking cycles, a “number of idiosyncrasies” in South Africa’s inflation and policy dynamics may see the MPC maintain a hawkish and cautious stance, said Jeffrey Schultz, BNP Paribas’s chief economist for the Middle East and Africa. The benchmark will probably peak at 7.75% by the end of March, with modest rate cuts likely from the second quarter of next year, he said.

South Africa is suffering its worst-ever electricity rationing, with state-owned company Eskom Holdings SOC Ltd. implementing blackouts for 205 days last year and every day so far in 2023. While the outages, known locally as loadshedding, are needed to protect the grid from collapse when the utility’s plants can’t meet demand, they are adding to the costs of food production and doing business and threaten to tip the country into recession.

Average inflation expectations for the next two years have increased, according to a survey by the Bureau for Economic Research. The poll, often cited in MPC statements, was conducted before the national energy regulator approved the biggest electricity-price increase in more than a decade, and the severity of blackouts worsened.

Though the rate of price growth is expected to slow in 2023 as the worst global inflation shock in a generation eases, it could take longer to approach 4.5% — the midpoint of the central bank’s target range at which the MPC prefers to anchor expectations. That may force the MPC to keep interest rates higher for longer.

--With assistance from Sarina Yoo.