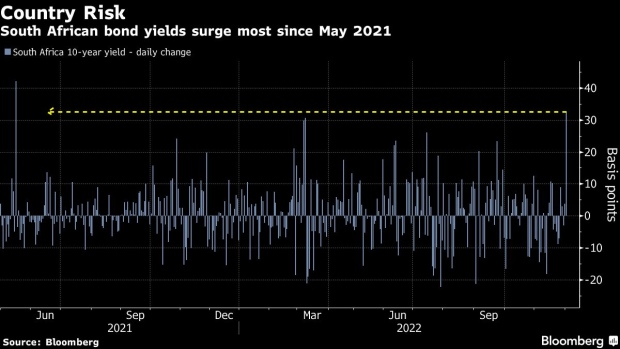 A worker counts out South African rand banknotes for change at the cash register inside a Spar Group Ltd. supermarket in the Die Wilgers suburb of Pretoria, South Africa, on Thursday, July 14, 2022. A quarterly index measuring sentiment about the nation’s expected economic performance fell to -39 in the second quarter, according to data released Wednesday by FirstRand Ltd.’s First National Bank, the lowest level since 1985. Photographer: Waldo Swiegers/Bloomberg , Bloomberg

(Bloomberg) -- Five years ago, Cyril Ramaphosa’s ascent to power fueled a euphoric rally in South Africa’s assets that coined a new word: Ramaphoria. On Thursday, a financial scandal threatened to end it all in a rout.

The nation’s currency posted its worst one-day loss since May while the government’s borrowing costs surged the most since 2015, as the president considers resigning over potential breaches of the constitution related to the theft of $580,000 stashed at a game farm he owns. Options traders bet on the wildest currency volatility in two years, and the cost to hedge against a sovereign default jumped the most in the same period.

The reversal marks a stark contrast to the market reaction between November 2017 and February 2018 when Ramaphosa emerged as the replacement for the scandal-ridden tenure of Jacob Zuma. His reform agenda and clean image helped fuel a 27% rally in the rand in that period.

Money managers now say he failed to deliver the policy changes required to ignite growth in the country, considered a bellwether for emerging markets. Rampant unemployment at about 33% and a continued mess in the electricity sector have lowered markets’ confidence in him, with the latest political crisis pushing them over the edge.

“The market dreads political instability and often prefers to go with the devil they know than the devil they don’t,” said Cristian Maggio, the head of portfolio and ESG Strategy at TD Securities in London. “But Ramaphosa’s reform agenda has been underwhelming to say the least. Doubts will remain as to whether another candidate can kick-start that process, but we surely know that Ramaphosa is unlikely to deliver what is needed.”

The rand held losses as government spokesman Vincent Mgwenya said in a televised briefing a response by the president is “imminent” without giving timing details for the address.

“The probability of Ramaphosa lasting another full term looks very low to me now,” said Kieran Curtis, director of investment at abrdn in London.

South Africa’s currency is no stranger to routs triggered by political drama. It dropped as much as 5.2% on Dec. 9, 2015, when President Zuma fired the then Finance Minister Nhlanhla Nene and replaced him with a little-known lawmaker. The rand plunged 9.2% in five days through April 3, 2017, as Zuma dumped another finance minister, Pravin Gordhan.

Thursday’s losses in South Africa came amid gains in global stocks, bonds and currencies after Federal Reserve Chair Jerome Powell signaled the central bank may slow the pace of monetary tightening and a Chinese official in charge of pandemic controls indicated strict rules may be relaxed.

In South Africa, though, the latest scandal will likely continue to weigh on markets, with traders looking ahead to a meeting of the ANC’s top leaders expected on Friday.

“A reprieve, let alone a rebound, is unlikely until uncertainty about the future of Mr. Ramaphosa and the ANC’s leadership lifts,” Jason Tuvey, a senior EM economist at Capital Economics, wrote in a note.

--With assistance from Sydney Maki and Leda Alvim.