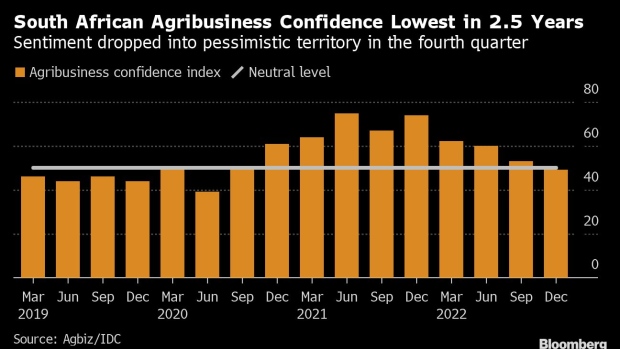 A worker uses a forklift to load bags of animal feed into a truck on the Ehlerskroon farm, outside Delmas in the Mpumalanga province, South Africa on Thursday, Sept. 13, 2018. A legal battle may be looming over plans by South Africa’s ruling party to change the constitution to make it easier to expropriate land without paying for it, with widely divergent views over the process that needs to be followed. Photographer: Waldo Swiegers/Bloomberg , Bloomberg

(Bloomberg) -- Confidence among South Africa’s agricultural businesses fell to the lowest level since the height of Covid-19 restrictions as factors including power cuts, rising protectionism in some export markets and animal disease outbreaks weigh on sentiment.

A confidence index compiled by the Agricultural Business Chamber, known as Agbiz, and the Industrial Development Corp. dropped to 49 in the final three months of the year. That’s the first time the gauge has been below the neutral 50 mark since the second quarter of 2020.

The pessimistic sentiment doesn’t bode well for the economy. The agricultural sector helped drive the recovery from 2020’s contraction and is an important source of jobs in a country where the official unemployment rate is more than 30%.

After years of a devastating drought in key livestock farming areas ended late in 2021, many farmers struggled to obtain the necessary vaccines for their animals, and the government announced a temporary nationwide ban on the movement of cattle in August to curb an outbreak of foot-and-mouth disease.

Higher rainfall at the start of the 2022-23 season now also risks delaying summer crop plantings in the northern regions of the country.

South Africa is the world’s second-largest exporter of citrus fruit and that industry was hit by export disruptions due to floods in April and an almost two-week strike at the national ports operator in October that came only two months after more than 2,000 containers of fruit were affected by a blockage at European harbors due to new import rules.

“The sector could bounce back if the weather conditions prove supportive in the coming months and the South African authorities get a handle on the market access issues in the EU,” Wandile Sihlobo, chief economist of Agbiz, said in an emailed statement.

The government and industry will also need to better combat the spread of foot-and-mouth disease and to strengthen biosecurity, he said.