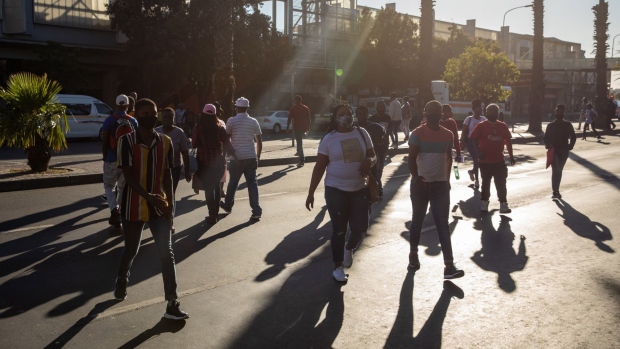 Commuters wearing protective face masks cross Strand Street in Cape Town, South Africa, on Monday, Jan. 11, 2021. The pandemic and restrictions imposed to contain it have devastated Africa's most industrialized economy, and the extension of curbs that came into effect at the height of the holiday season bode ill for efforts to engineer a rebound. Photographer: Dwayne Senior/Bloomberg , Bloomberg

(Bloomberg) -- South Africa should prioritize economic growth-enhancing reforms to enlarge its tax base, create jobs in the private sector that reduce the reliance on social welfare and ease the strain on public finances, a local commerce group said.

A business confidence index compiled by the South African Chamber of Commerce and Industry fell to 94 in March from 94.3 the previous month, according to an emailed statement Wednesday. While the index average improved by 13.2 points in the six months through March, compared with the preceding six months, it is important for authorities to address “policy certainty, structural impediments and low investment ratings that are still preventing the economy from breaking through the present impasse,” Sacci said.

Virus restrictions have caused less disruptions since the second quarter of 2020, but they’ve left some sectors in need of “state-of-the-art economic policy formulation,” it said.

Africa’s most-industrialized economy contracted the most in a century last year after lockdown measures aimed at limiting the spread of the coronavirus shuttered some activity for months, leading to business closures and a surge in unemployment. The government only expects output to recover to pre-pandemic levels in 2023.

While Finance Minister Tito Mboweni in February reduced the anticipated peak for state debt to 88.9% of gross domestic product in the 2026 fiscal year, from a previous forecast of 95.3%, the business group flagged high debt levels, onerous debt-service costs that crowd out spending on service delivery and social welfare, and a relatively narrow tax base as risks. Economic growth is the “ultimate solution” to broaden the base of taxpayers and create the jobs needed for a meaningful recovery, it said.

The rollout of Covid-19 vaccines in South Africa, the country hardest hit by the virus on the continent, “should play an important positive role in reigniting the economy, with more space for recalibrating the management of government, but also to refocus the private sector and local and foreign investors into investing in an economy with inherent potential,” Sacci said. “Investor confidence remains a key element at chipping away at the economic ills.”