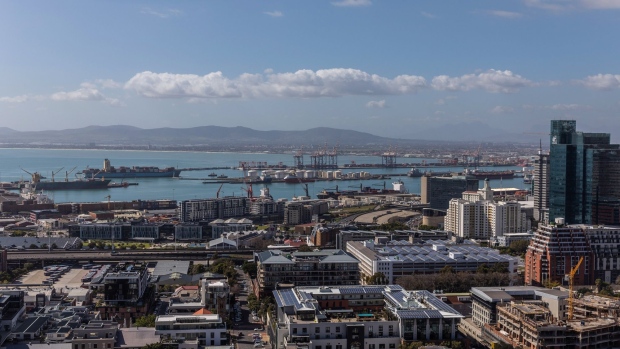 The port area stands beyond commercial high-rise properties in Cape Town, South Africa, on Wednesday, Aug. 19, 2020. The country, which in late March implemented one of the world’s strictest lockdowns to curb the spread of Covid-19, moved to a so-called alert level 2 on Monday, enabling most restricted economic activity to resume. Photographer: Dwayne Senior/Bloomberg , Bloomberg

A confidence index compiled by the South African Chamber of Commerce and Industry dropped to 92.8 in November from 94.9 in the previous month, the group said Wednesday in an emailed statement.

The mood is likely to be dampened further by the emergence last month of the Covid-19 omicron variant that’s prompted more than 90 nations to ban travel to and from South Africa right before its summer holiday season and will likely crimp economic growth in the fourth quarter.

SACCI criticized the manner in which South African scientists announced the detection of the omicron variant.

“The disclosure by South African scientists sparked greater concern and negatively impacted the business climate,” said the chamber. “These announcements should be made with greater circumspection taking account of broader implications. Hopefully the rushed decisions by other countries on travel restrictions will be tempered as more information on the omicron variant emerges.”