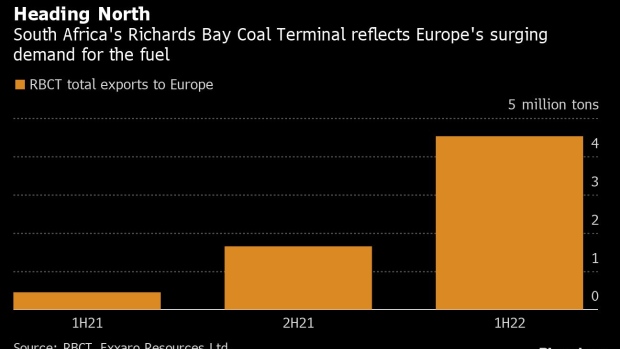 European coal prices surged to a record on Wednesday as Russia squeezes natural gas shipments following its invasion of Ukraine, boosting demand for the most polluting fossil fuel to help prevent blackouts. Exxaro and other South African coal exporters can’t fully benefit from that bonanza because the rail operations of state-owned Transnet SOC Ltd. have been hit by vandalism, sabotage and a shortage of locomotives.

Those challenges mean Transnet has been struggling to deliver coal from mines concentrated in Mpumalanga province to the continent’s biggest export facility, Richards Bay Coal Terminal. In the first half of this year, Exxaro said it shipped just 2.5 million tons of coal to RBCT, down from 4.1 million tons a year earlier and well below its annual capacity to export 12 million tons.

“We’re a bit cautious about the rest of the year,” Sakkie Swanepoel, Exxaro’s marketing manager, said in an interview, referring to Transnet. “We have not seen an uptick in performance.”

Transnet has taken unprecedented measures, including seeking approval for its security guards to be able to make arrests and conduct searches, but the changes haven’t had a significant effect. Other miners in South Africa including Thungela Resources Ltd. have lowered their export guidance.

RBCT increased its capacity to 91 million tons a year, but rail bottlenecks have resulted in its annual exports dropping since 2017. That decline could extend to a fifth year, according to Swanepoel, who estimates that 55 million to 60 million tons of the fuel will be shipped from the facility in 2022. Last year, it managed 58.7 million tons.

Still, South African coal shipments to Europe have surged by more than 700% in the first half of the year, while flows to Asia have dropped.

Producers are using other ports when possible to get coal to export markets, Swanepoel said. Exxaro expects European demand for South African coal to increase in the second half of the year.