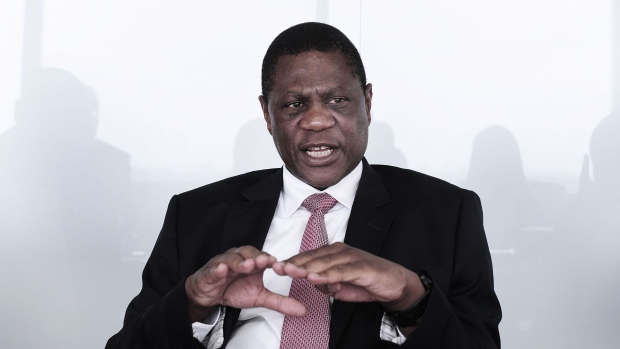 (Bloomberg) -- The top four leaders of South Africa’s governing African National Congress will meet Wednesday evening to formulate their response to the findings of an investigation into a scandal enveloping President Cyril Ramaphosa.

The furor erupted in June when Arthur Fraser, the former head of South Africa’s national spy agency, laid charges against Ramaphosa, alleging that he sought to cover up the 2020 theft of more than $4 million from his Phala Phala game farm. Parliament set up a three-member panel to decide if there are grounds for lawmakers to take action against the president and it is due to deliver its findings to the legislature on Wednesday.

“Because it is a very sensitive matter, the officials of the ANC decided that as soon as the report is ready, we should meet,” Paul Mashatile, the ANC’s treasurer-general, said in an interview at Bloomberg’s Johannesburg offices on Tuesday. “We have asked the chief whip of the ANC and the speaker to come and brief us. The officials were very wary of us taking a decision before the report was out.”

Parliament is set to adopt the report on Dec. 6, and its unclear whether the ANC will instruct its lawmakers to protect the president, who is expected to win a second term as party leader at a conference that starts Dec. 16.

Besides Ramaphosa and Mashatile, the party’s other top officials are Deputy President David Mabuza and Gwede Mantashe, its chairman.

The president has admitted that money he made from selling animals was stolen, but far less than Fraser alleged, and has denied doing anything wrong. He’s refused to publicly answer questions about what happened, and opposition parties says they want clarity on whether he violated tax or exchange-control rules.

The Hawks, a special police investigative unit, and the nation’s graft ombudsman have instituted separate probes of the matter. Under ANC rules, Ramaphosa will have to vacate his post if he is criminally charged.

“On the Phala Phala case, we are not giving a blow-by-blow account, but we have taken 68 statements and are continuing with our investigations,” Godfrey Lebeya, the head of the Hawks, told reporters in Pretoria, the capital.

The ANC’s integrity committee is also drafting its own report and will report back to its national executive committee next week.

“The commission may well say, yes you are not charged, but we think the allegations against you are so damaging that you should step aside,” Mashatile said. “Once they say so you should, even if you are not charged. There may be a situation where the integrity commission says step aside and you feel it is not fair and the matter then goes to the NEC to make the final decision.”

--With assistance from Paul Vecchiatto, Gem Atkinson and Amogelang Mbatha.