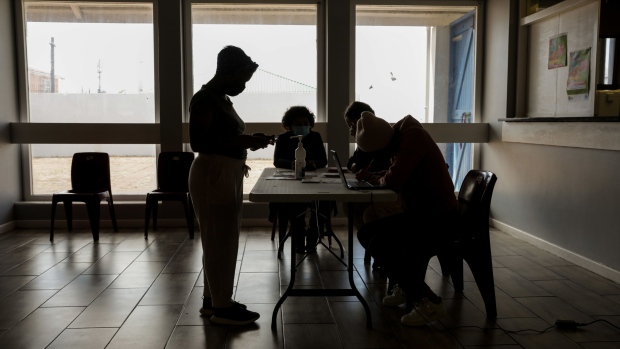 A resident registers their details at the Grassy Park civic center vaccination point in Cape Town, South Africa, on Tuesday, Nov. 30, 2021. South African scientists were last week the first to identify the new variant now known as omicron, and while symptoms have been described as mild, the exact risk from the new strain is still uncertain. Photographer: Dwayne Senior/Bloomberg , Bloomberg

South Africa’s government will meet in the coming week to decide whether more stringent virus restrictions are needed following a surge in cases after the onset of the new omicron variant, Health Minister Joe Phaahla said.

“We will look at for instance, among other things, the rapid rise and also what pressure our health facilities are under,” he told reporters on Friday. Serious curbs can be avoided if people wear masks, avoid large gatherings and more get vaccinated, he said.

The seven-day rolling average of new infections in South Africa has jumped to 4,840, from less than 300 two weeks ago.