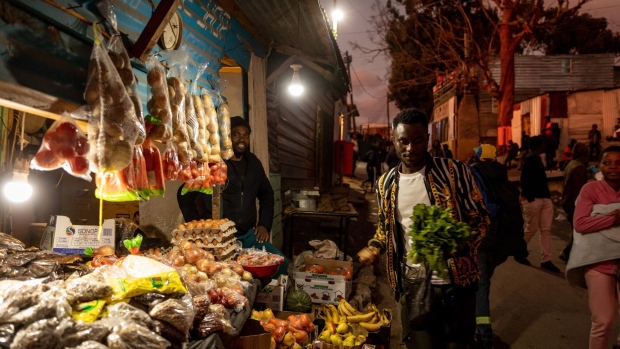 Bulbs illuminate a food stall in the Imizamo Yethu informal settlement in the Hout Bay district of Cape Town, South Africa, on Wednesday, Aug. 3, 2022. South Africa's state-owned power utility Eskom Holdings SOC Ltd. warned it may have to implement rolling blackouts for the first time in more than a week due to a shortage of generation capacity. , Bloomberg

(Bloomberg) -- South Africa’s biggest labor-union federation will stage a national strike Aug. 24 to protest against the rising cost of fuel and food and continuing power cuts.

The planned work stoppage will also represent “a response by the workers to the ongoing class warfare directed at them by both public and private sector employers,” the Congress of South African Trade Unions said in an emailed statement on Monday. Further details about the strike will be announced on Aug. 18, it said.