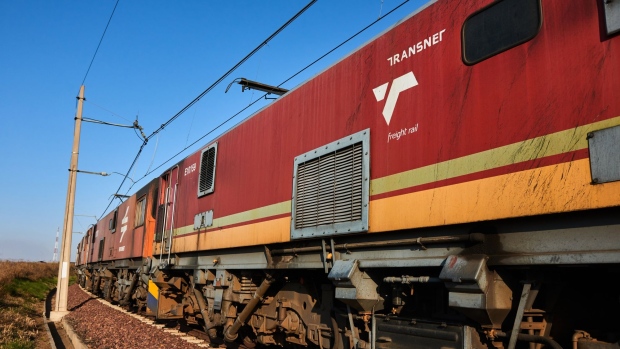 The locomotive of a Transnet SOC Ltd. freight train transports wagons of coal from the Mafube open-cast coal mine, operated by Exxaro Resources Ltd. and Thungela Resources Ltd., towards Richard's Bay coal terminal, in Mpumalanga, South Africa on Thursday, Sept. 29, 2022. South Africa relies on coal to generate more than 80% of its electricity, and has been subjected to intermittent outages since 2008 because state utility Eskom Holdings SOC Ltd. can't meet demand from its old and poorly maintained plants. Photographer: Waldo Swiegers/Bloomberg , Bloomberg

(Bloomberg) -- The United National Transport Union, which represents some of the workers at South African ports and freight rail operator Transnet SOC Ltd., told its members to begin a strike on Thursday to demand a bigger wage increase from the state-owned company.

Transnet on Wednesday doubled its offer to 3% to head off the strike action. The proposed raise is well below annual inflation of 7.6%.

The company’s offer “is not aligned with the mandate that was given to us by the members,” Cobus van Vuuren, general secretary of Untu, as the labor union is known, said in a phone interview on Thursday. “The strike is on. There is action across the country.”

Transnet’s rail and ports facilities are key to South African exports of bulk commodities such as coal, iron ore, chrome and manganese. A strike would constrain exports of some of the commodities amid surging demand globally.

Thungela Resources Ltd., the nation’s largest shipper of thermal coal burned at power stations, warned Thursday it may be forced to curb production if the strike becomes protracted. While the miner said it’s able to operate without using rail for seven days, constraints over recent months have resulted in relatively high stockpile levels.

“In the event of a protracted strike extending to two weeks, we would be forced to further curtail production, with the potential resultant impact being a reduction of up to 300,000 tons of export saleable production,” Thungela said in the statement.

Existing logistics constraints at Transnet are expected to cost South Africa’s mining industry 50 billion rand ($2.8 billion) in lost opportunities this year, Roger Baxter, chief executive officer of Minerals Council South Africa, said at a conference on Wednesday. The poor performance of Transnet rail lines and other infrastructure are as bad for the industry as the regular power outages the state electricity provider is implementing, he said.

Transnet is assessing the impact of the strike on operations, spokeswoman Ayanda Shezi said.

“Our priority is to protect assets and those employees who have reported for duty,” she said in a text message on Thursday. “The strike is illegal and unprotected as certain prescripts were not followed in applying to strike.”

The remuneration of state employees accounts for almost a third of total government spending and keeping it in check is key to the National Treasury’s plans to rein in its budget deficit and bring runaway state debt under control. Eskom Holdings SOC Ltd., the state power utility, in July signed a pay deal with labor unions for a 7% increase to end an impasse that triggered a week of illegal protests and deepened electricity outages.