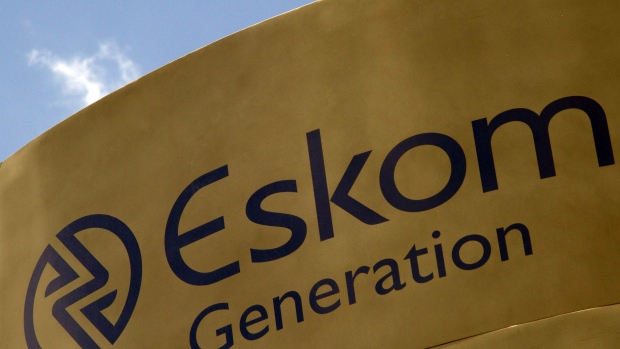 An Eskom Holdings Ltd.'s sign is seen at the entrance to the company's Kendal power station in Delmas, South Africa. , Antony Sguazzin

(Bloomberg) -- Power plant breakdowns at South Africa’s state power utility are at the highest in at least a year, affecting two-fifths of generation capacity and exacerbating outages that are hindering economic growth.

Eskom Holdings SOC Ltd. said on Wednesday it has imposed power cuts of 6,000 megawatts, or about a fifth of demand, because breakdowns have taken 19,052 megawatts of generation capacity out of action. That’s the highest since at least this time in 2021, according to calculations by Bloomberg News. Eskom’s media desk and spokesman didn’t respond to queries as to whether the breakdowns are at a record.

The breakdowns across a number of Eskom’s 14 coal-fired power plants come at a bad time. An additional 4,984 megawatts are out due to maintenance and one of the two units at the continent’s sole nuclear power plant is shut down for refueling on Wednesday.

Eskom has subjected South Africa to its worst power cuts this year since it regularly started intermittent outages in 2008 as it struggled to meet demand from its fleet of poorly maintained coal-fired power plants. Currently, residential areas can expect at least six hours of outages a day.

The level of outages will be reduced to 5,000 megawatts at 5 a.m. local time on Friday, Eskom said. Wednesday marks the record 38th consecutive day of outages and the 181st day of rolling blackouts this year, according to Bloomberg News’ calculations.

--With assistance from Renee Bonorchis.