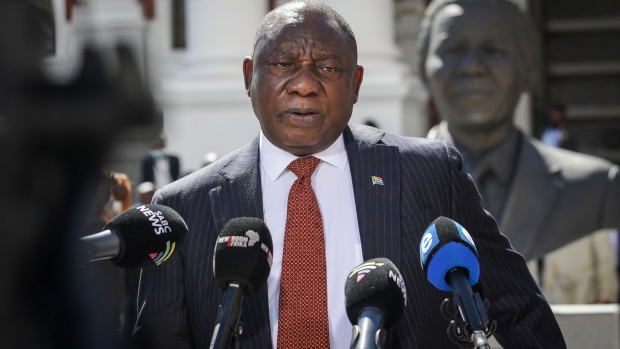 Cyril Ramaphosa, South Africa's president, speaks to the media outside parliament in Cape Town, South Africa, on Thursday, Nov. 11, 2021. South Africa’s Treasury vowed to return state finances to a sustainable path, holding off expanding welfare measures in one of the world’s most unequal societies. Government bonds and the rand gained. , Bloomberg

South Africa’s chief prosecutor cautioned that arrests following a three-year judicial inquiry into state corruption will take time, as she announced plans to recruit a replacement for her top investigator who quit last week.

A panel led by Acting Chief Justice Raymond Zondo is due to complete its graft probe this month, and it will fall to National Director of Public Prosecutions Shamila Batohi to ensure action is taken against those who were party to wrongdoing. While President Cyril Ramaphosa came to office in 2018 with a pledge to ensure officials suspected of stealing more than 500 billion rand ($31 billion) of state funds during his predecessor Jacob Zuma’s rule are held to account, there have been no high-profile convictions so far.

Zondo’s report will likely result in “an avalanche” of work for the National Prosecuting Authority, Batohi told reporters on Monday. The inquiry into so-called state capture heard testimony from hundreds of witnesses since it began hearings in 2018, and scores of people have been implicated.

“I really want to temper expectations in that regard to say that there is a big difference between testifying in a commission and putting together a water-tight case,” Batohi said. “It will take time to go through that and ensure we very strategic about the cases that we take emanating from the commission.”

The briefing came days after the head of the Investigating Directorate -- established in 2019 and tasked with dealing with state capture-related crimes -- Hermione Cronje, resigned. Cronje will vacate the office in March and efforts are under way to find a replacement, Batohi said.

The chief prosecutor denied there was any animosity between herself and Cronje, saying that initially she sought to change her mind about the resignation, before deciding it would be best for all parties to accept it.