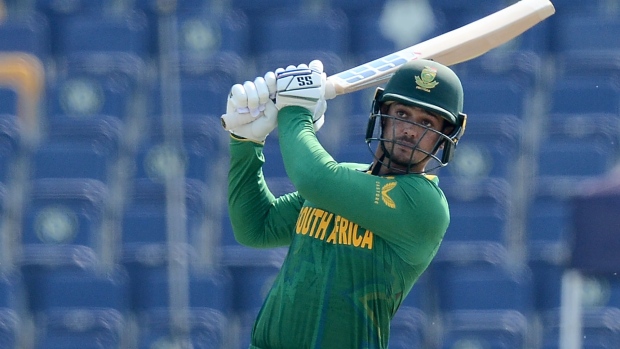 (Bloomberg) -- A former captain of South Africa’s national cricket team withdrew from a T20 World Cup match on Tuesday after the sport’s national body instructed all players to “take the knee” before every game in the tournament that’s under way in the United Arab Emirates.

Quinton de Kock, the wicketkeeper and star batsman, declared himself unavailable for the game against the West Indies, according to captain Temba Bavuma. The decision was for “personal reasons,” said Bavuma, who is the first Black player to lead the national side.

Cricket South Africa made the symbolic act to show opposition to racism compulsory for all its players shortly before the match, its second of the tournament. De Kock hasn’t knelt before previous games.

CSA started a probe earlier this year to “promote unity and reconciliation” in the sport. That included determining the causes, nature and extent of the racial discrimination and lack of transformation in its structures since the merger of the former White and Black cricket boards three decades ago.

South Africa was ruled by a repressive White government until 1994. Laws to help Black people get a foothold in the economy and regulations by sports bodies to force team selectors to pick more diverse squads have had limited success over the past 27 years.

De Kock was replaced in the side for the match by Reeza Hendricks. Still, more than half of the team of 11 players were White.

The Cricket South Africa board will wait for a “further report from team management before deciding on the next steps,” regarding De Kock, it said in a statement. “All players are expected to follow this directive for the remaining games of the World Cup.”