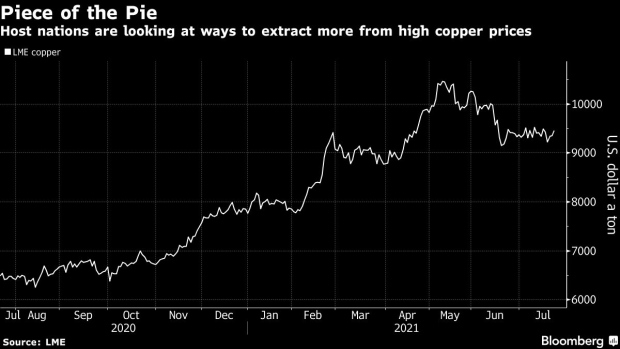 (Bloomberg) -- Policy uncertainty in Peru and Chile, which account for about 40% of global copper production, is supportive of future prices of the metal as producers balk on pulling the trigger on investments, according to Freeport-McMoRan Inc.

Speaking to analysts Thursday, Chief Executive Officer Richard Adkerson said the shifting political winds in the two South American copper giants are part of the challenges that mining faces to meet growing demand as the world transitions away from fossil fuels.

Adkerson, a 74-year-old mining veteran, plans to work with the industry in Peru to engage with the incoming government of left-winger Pedro Castillo, who has vowed to take a bigger share of the mineral windfall to fight poverty. In Chile, Freeport is holding off on a major expansion as the country debates tax hikes, drafts a new constitution and heads into a presidential election at a time when voters are pushing for more social spending to address inequalities.

“We really don’t know what the outcome is, bottom line,” Adkerson said. “This is going to be supportive of future copper prices.”

Copper hit a record earlier this year as economies emerged from Covid lockdowns at a time of disrupted supplies and an acceleration of a clean-energy shift that will require much more of the metal used in wiring. The prospect of surging demand comes after years of exploration and development cutbacks when prices were low and as the supply side grapples with rising social and environmental expectations and falling ore quality.

Still, Adkerson offered some hope that the industry will be able to avoid drastic policy changes in Peru, pointing to stability agreements and examples of other candidates moderating their approaches once in office.

On a seperate call Thursday, Newmont Corp. CEO Tom Palmer said the company expects to make a decision by December on a proposed investment at the Yanacocha mine in Peru. Newmont would likely start engaging with the new cabinet over the next six months, and is optimistic of being well received, he said.