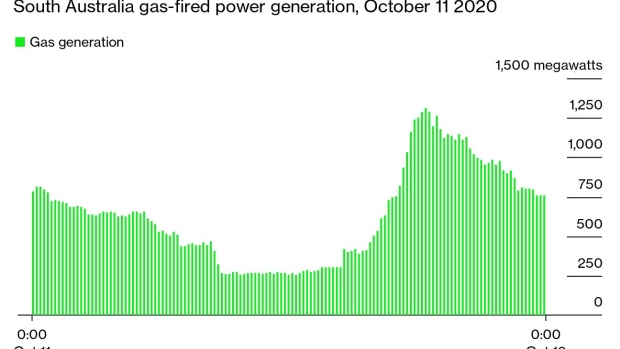 (Bloomberg) -- There are certain energy markets that offer us a glimpse of the future. China, the world’s largest auto market and home to major electric vehicle manufacturers, is one. Japan, with its intense competition for retail electricity consumers is another. Australia, where one in four houses has a solar power system, is yet another.

Let’s drill down on Australia a bit. On Oct. 11, 2020, South Australia generated more solar power than the grid’s total electricity demand; for the early afternoon, the state was entirely solar-powered. In its latest Quarterly Energy Dynamics report, the Australian Energy Market Operator called the occurrence a record for a grid this size, serving nearly 1.8 million people.

This is a striking power system milestone on its own, but it becomes even more striking as an object lesson for when—not if—other power grids reach similar penetrations of solar power.

First detail of note: in the last quarter of 2020, in South Australia, almost three-quarters of the solar power generated was from rooftop systems, not large utility-scale installations. As I wrote last year, the highly distributed nature of solar generation in Australia, and South Australia in particular, has implications for the stability of the grid and for grid business models—especially since the rate of installation of rooftop solar is speeding up, not slowing down.

There’s currently about 1.7 gigawatts of “behind the meter”—that is, small-scale rooftop solar—installed in South Australia. BloombergNEF expects that figure to reach 2.8 gigawatts by 2030. This has led the government, in a bit of a panic, to implement standards that will allow the market operator to remotely disconnect rooftop systems if their output threatens to overwhelm the grid.

Second thing: while it’s fair (and exciting!) to say that South Australia was 100% solar-powered during Oct. 11, 2020, that doesn’t mean that there was no other power generated during solar’s peak. Natural gas-fired generators ran all day, reaching a low of about 250 megawatts while solar was at its peak.

The question to ask, then, is where did that power go? It didn’t go into batteries or some other exotic way of storing bulk power. Instead, it went to the neighboring state of Victoria, whose imports of South Australia power exactly offset its neighbor’s excess generation.

South Australia gas generators were still running because the grid needed stability. Solar power is generally predictable at large scale, but it is also variable, and of course, it disappears as the sun sets. The grid needs to be able to respond to both minute variations and large changes in supply and demand, and to quickly provide power as solar generation diminished.

That’s not to say that there won’t be future ways of either storing or using excess solar electricity. The world’s biggest power consumers, e.g. Alphabet Inc.’s Google, are already in the process of shaping their demand to match supply, rather than expecting the grid to shape supply to meet their demand.

Give enough large, cost-conscious electricity consumer very inexpensive, zero-carbon electricity and they will eventually figure out something to do with it, and not just in data centers. Andrew Forrest, founder of Fortescue Metals Group Ltd and one of Australia’s major business figures, maintains that the country’s abundant renewable power resources should be used to make zero-emissions hydrogen, which should then be used to make zero-emissions iron and steel.

Forrest’s wealth, mind you, is from mining, but it’s not just miners proposing such notions. South Australia’s conservative government, in its climate action plan, wants renewable generation in the state to reach 500% (not a typo) of current grid demand by mid-century. Needless to say, that level is well in excess of any expected demand growth from the residential and commercial sectors. But that much additional green power could go beyond just enabling industrial decarbonization, it could also attract companies seeking to reduce the carbon intensity of their output.

A day in which solar provides more than 100% of an entire state’s hourly electricity demand is certainly an edge case today. But South Australia is also a glimpse of the future, a future in which electricity is clean, abundant to the point of excess, and sometimes a healthy challenge to manage.