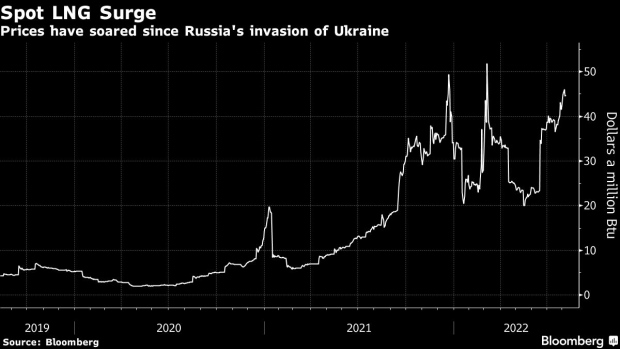 The world’s third-biggest importer of the chilled fuel is seeking additional cargoes to meet forecasts for increased domestic demand and is targeting to lift inventories to about 90% full by November, from about 34% currently, the Energy Ministry said Monday. That comes after heat waves in the summer and “high” uncertainties internationally from the Russia-Ukraine conflict, the ministry said.

South Korea isn’t expecting a supply disruption for winter, but the move to purchase more LNG outside of long-term contracts is likely to increase international competition for spot cargoes that had pushed prices to near the record levels reached shortly after Russia invaded Ukraine in late February. It will also likely to make it trickier for Europe to source vitally needed additional supply to replace volumes from Russia and fill inventories, though the region has managed to lift its stockpiles to nearer five-year average at 72% full.

State-run Korea Gas Corp. has been making spot purchases since April, securing about 3.5 million tons for July alone, the ministry said. Current inventories are about 1.81 million tons, above the minimum threshold of 910,000 tons for winter, it said.

The nation last year bought 16.6 million tons on spot markets, or 35% of total imports, according to data from the International Group of LNG Importers.

Korea Gas purchased more than 20 LNG cargoes for delivery for winter in the last few weeks, a larger shopping spree than normal for this time of year, according to traders. The nation is considering spot purchases, short-term contracts, importing LNG from overseas assets and potentially swapping volumes with private importers, the ministry said.

Korea Gas will need to buy an extra 10 million tons of LNG by year-end to avoid an energy crunch, the Korea Economic Daily said earlier Monday, citing unidentified officials at the company.