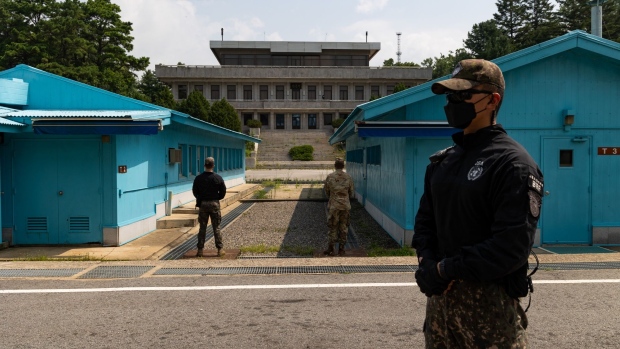 South Korean and United Nations Command (UNC) soldiers stand guard next to the United Nations Command Military Armistice Commission (UNCMAC) conference buildings at the truce village of Panmunjom in the Demilitarized Zone (DMZ) in Paju, South Korea, on Tuesday, July 19, 2022. South Korean prosecutors are investigating members of former President Moon Jae-in's government over the 2019 forced repatriation of two North Koreans, whose return to face criminal charges and likely execution had been denounced by critics as a violation of human rights. , Bloomberg

(Bloomberg) -- South Korea doesn’t back the use of force to bring down the North Korean regime, President Yoon Suk Yeol said, adding he is open to speak with leader Kim Jong Un if he’s willing to end his atomic ambitions.

Yoon said at a news conference in Seoul on Wednesday to mark 100 days in office that talks between the leaders of the two Koreas shouldn’t be a “political show.” He reiterated he has an “audacious plan” of food, energy and infrastructure aid for Pyongyang if it decides to give up its atomic weapons.

“What’s important is the establishment of a sustainable peace between the two Koreas,” Yoon said, offering an opening to Kim’s government by saying aid could start even before the end of the state’s nuclear program as long as Pyongyang shows a “firm will” that puts it on a path for denuclearization.

Yoon, a conservative who took power in May after winning by a razor thin margin, has advocated a tougher line with China and North Korea -- bringing his country’s security policies in greater alignment with those of the US and Japan. He has seen his support fall to among the lowest for any South Korean president at a similar point in their term after a series of political missteps. It was at 25% in a Gallup Korea tracking poll last week.

“It is important to humbly uphold the public’s sentiment shown in the opinion polls,” Yoon said, adding he would “like to take a closer look into our communication.”

A few hours after the news conference, South Korea’s Joint Chiefs of Staff said North Korea fired two cruise missiles Wednesday morning, without providing details about flight distances. Although there are no United Nations Security Council resolutions banning launches of such rockets, it was one of the most provocative moves from the state since it fired off eight ballistic missiles on a single day in June -- in violation of the UN measures.

After making a name for himself by prosecuting government officials for graft, Yoon faced criticism for appointing people to his new government who faced similar allegations. Strikes that unfolded in the trucking and shipbuilding sectors stoked worries about the export-driven economy.

Yoon called the strikes “illegal acts,” indicating in the news conference that he planned to take a tough line on labor activists. The comments may further complicate Yoon’s relations with the opposition Democratic Party, which has courted labor unions for years. The party holds a majority in parliament large enough to override a veto by Yoon and has shown little willingness to seek compromise with a damaged leader.

North Korea, meanwhile, has stepped up its heated rhetoric toward South Korea, which could set the stage for a resumption of military provocations that have slowed in recent months. Kim’s regime appears to be preparing to conduct its first nuclear test since 2017, government officials from Japan, South Korea and the US have said.

Any display of the weapons in its nuclear arsenal would serve as a reminder of the security problems posed by Pyongyang that have simmered while US President Joe Biden’s administration has been focused on Russia’s invasion of Ukraine.

Tensions could flare again when the US and South Korea hold joint military drills that are expected to start next week. For years, North Korea has called joint drills a prelude to an invasion and warned that its military was ready for confrontation.

Last month, Kim issued some of his harshest comments toward South Korea since Yoon took office, saying, “US imperialists are pushing the South Korean authorities into a suicidal confrontation” with his country.

Kim referred to a potential preemptive strike by his adversaries and warned, “such a dangerous attempt will be immediately punished by our powerful force, and the Yoon Suk Yeol regime and his army will be eliminated.”