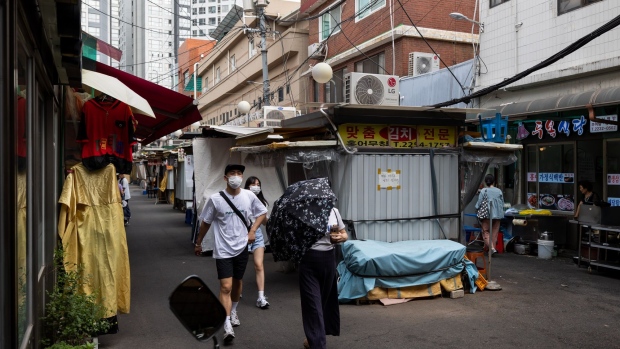 Pedestrians at Seoul Central Market in the Jung-gu district of Seoul, South Korea, on Saturday, July 31, 2021. For decades, Seoul Central Market, with its shabby shops and grungy street food, has been a gathering place for retirees seeking cheap meals, clothing and kitchenware. These days, they’re increasingly competing for space with hipsters in heels and Birkenstocks who stroll past chic restaurants and cafes sprouting between hole-in-the-wall rice shops and noodle joints. Photographer: SeongJoon Cho/Bloomberg , Bloomberg

Gross domestic product gained 0.3% in the July-to-September period, decelerating from 0.8% in the second quarter and slower than the 0.6% predicted by economists, data from the Bank of Korea showed Tuesday. From a year earlier, the economy expanded 4%.

The result complicates the BOK’s plans for another interest-rate increase this year, after it began a tightening cycle in August. Governor Lee Ju-yeol has said the central bank will consider another hike in November in the event the recovery proceeds as expected, having projected a 4% expansion for 2021.

Growth had been expected to ease last quarter as daily infections surged above 1,000 from July and authorities imposed a semi-lockdown in Seoul and other major cities. In an online seminar Monday, the BOK said it expected rising vaccinations and a transition to “living with Covid” to support consumption for the remainder of this year and into 2022.

The BOK on Monday flagged risks to the economy from China’s energy crunch and property market woes. It estimated a 1 percentage point slowdown in China reduced Korea’s growth rate by 0.1-0.2 percentage point.

Looking at GDP by component, private consumption fell 0.3% last quarter from the April-June period. Government spending was up 1.1%. Exports, as measured on a real basis, increased 1.5%, while facilities investment fell 2.3%.