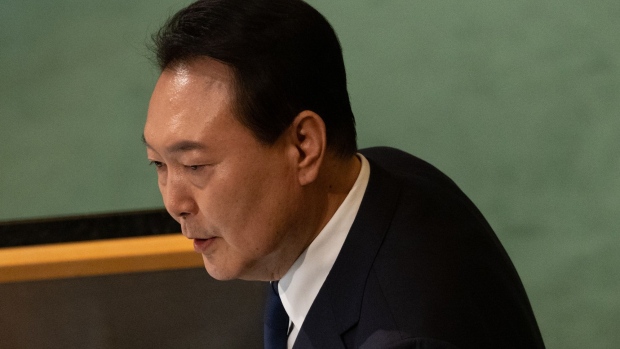 Yoon Suk Yeol, South Korea's president, speaks during the United Nations General Assembly (UNGA) in New York, US, on Tuesday, Sept. 20, 2022. US President Biden, UK Prime Minister Truss and New Zealand Prime Minister Ardern are among the heads of state attending this year after Covid-19 moved the gathering online in 2020 and limited the in-person event in 2021. , Bloomberg

(Bloomberg) -- The support rate for South Korea’s president hit a record low after gaffes during trips abroad eroded confidence in his four-month-old government and led the opposition camp to pass a motion calling for the dismissal of his foreign minister.

The approval rate for President Yoon Suk Yeol hit 24% in a weekly Gallup Korea tracking poll released Friday, with about a third of respondents citing troubles with diplomacy and a lack of experience as reasons for disapproval. The support number is down 4 percentage points from a week ago and a sharp fall from 51% when he took office in May.

Yoon can ill afford any slip in support with his conservative People Power Party holding a minority in parliament as he tries to push through plans to spur economic growth driven by the private sector and mitigate the effects of the won trading at its lowest levels in 13 years.

But media in South Korea has seized on Yoon’s troubles abroad that included scheduling difficulties, which caused him to forgo paying respects at the coffin of Queen Elizabeth II when he was in the UK for her funeral. He was also caught on a hot microphone during a trip to the US a few days later where he appeared to be insulting Congress. The presidential office disputed this, saying the comments were taken out of context, had parts that were inaudible and had nothing to do with the US.

This week, the progressive Democratic Party used its majority in parliament to pass late Thursday a non-binding no-confidence measure in Foreign Minister Park Jin, citing Yoon’s recent troubles overseas. The president has shown no signs that he will replace Park and is not compelled to do so.

Yoon has sought to bring a hawkish tone to South Korea’s diplomacy that takes a tough line on North Korea and China while bringing greater military cooperation with the US. He has also sought to repair ties with Japan. Friction between the two Asian neighbors who host the bulk of US troops in the region can cause difficulties for President Joe Biden as he seeks unity among partners in security policy.

But Yoon’s government has strongly protested the Inflation Reduction Act signed last month by Biden. Provisions including tax credits of as much as $7,500 for purchases of electric vehicles made in North America threaten to disadvantage major South Korean brands like Hyundai and Kia.

US Vice President Kamala Harris, who just finished a trip to Japan and South Korea, met Yoon in Seoul after vowing to work with his government to resolve the trade dispute.

The US law requires carmakers to assemble their EVs in North America to receive subsidies, but Hyundai Motor Co. doesn’t yet have any operational electric car plants there. All three of South Korea’s main battery makers -- LG Energy Solution Ltd., SK On Co. and Samsung SDI Co. -- import most of their critical minerals from China, another obstacle in the law for the nation’s automakers.