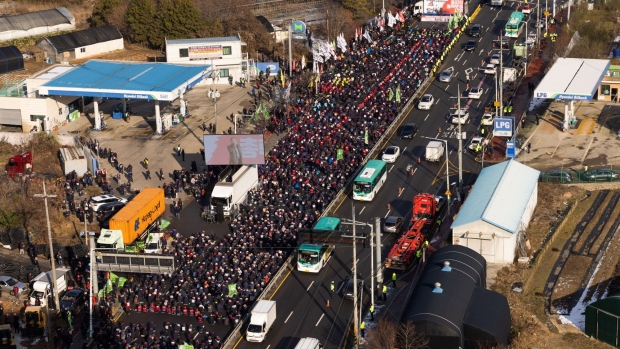 (Bloomberg) -- South Korea ordered striking truckers in the petrochemical and steel sectors to return to work, widening measures aimed at ending a labor impasse the government said could deal a “fatal blow” to its global competitiveness.

President Yoon Suk Yeol authorized the measure issued at a cabinet meeting Thursday, his office said in a text message. The order comes as the strike enters its third week, and after Yoon last week issued a similar order for truck drivers in the cement industry to return to work.

The truckers’ strike has added to worries after South Korea’s exports fell the most in two-and-a-half years in November, dragged down by an economic slowdown in China and cooling demand for semiconductors. The country is on track to record its first annual trade deficit since the global financial crisis as elevated oil prices and a fluctuating currency remain risks for exporters.

Finance Minister Choo Kyung-ho said the “massive logistics disruption is wreaking havoc on our economy.” Truckers who do not abide by the back-to-work order may face criminal charges including up to three years in prison, he added.

“This may deal a fatal blow to the global competitiveness of the steel industry — already suffering a hard time due to the September typhoon damage and global demand slowdown — as well as the petrochemicals industry facing crisis due to global oversupply,” he said at a news briefing.

Union officials have not yet released a statement on the most recent work order. The union representing the truckers in the cement sector had criticized the previous order, saying protests will continue. They are demanding a better wage plan that guarantees minimum freight rates, which would help to ease pressure from skyrocketing fuel costs.

The ongoing labor action has caused at least $2.6 billion in supply disruptions to the economy, according to the trade ministry.

Shipments of steel products stood at about 48% of usual levels the last two weeks and some companies have already suspended operations or curtailed production, the transport ministry said in a statement. Petrochemical product shipments reached just 20% the normal levels, causing close to $1 billion in damage, it added.

The public appears to be backing Yoon’s tough stance on the labor action. A poll conducted this week by Gongjung showed the president’s approval rating had jumped by more than 9 percentage points to over 41% from its previous survey taken just before the strike started.

But Park Sangin, an economics professor at the Seoul National University, said the government may be inflating the actual damage caused by the strike to rally backing for the president.

“Serious logistics disruption will only happen when the strike goes on longer term. It may take up to six months to a year eventually,” Park said.

He added there appeared for now to be sufficient stocks of steel, cement and other materials. But a prolonged walkout could cause a serious crisis by triggering production disruptions in such major industries as car production, shipbuilding and semiconductors, Park said.

The truckers’ strike — protesting what they see as a lack of progress on wage demands — began Nov. 24 and virtually suspended manufacturing and the delivery of steel, cement and petroleum products. Cement deliveries were down more than 90% at one point, but recovered to about 100% of normal levels after last week’s return-to-work order, according to the government.

Shipments of containers at 12 ports in the country recovered to 115% of normal levels after the government asked drivers last week to return to work by sending text messages, letters and making phone calls, according to a statement from the transport ministry Wednesday evening.

--With assistance from Sam Kim.