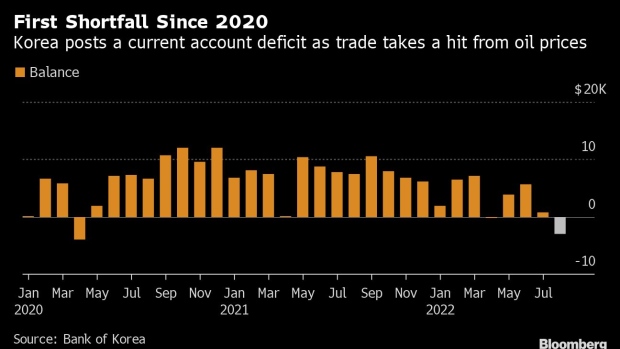 The Busan Port Terminal (BPT) in Busan, South Korea, on Thursday, Sept. 22, 2022. Bank of Korea Governor Rhee Chang-yong widened the door for an outsized interest-rate hike after another jumbo move by the Federal Reserve pushed the won below a key psychological level. , Bloomberg

The shortfall in the goods balance came in at $4.4 billion in August, worsening from $1.4 billion in the previous month, according to data released Friday by the Bank of Korea. The overall current account also fell into the red, posting a deficit of $3.1 billion, the worst in more than two years.

The deficit intensifies concerns about the strength of the won at a time when the Federal Reserve is accelerating the pace of its policy tightening. The Korean currency has been Asia’s worst performer this year after the yen and the BOK may raise its own rate by a bigger-than-usual margin to try to help support the won.

“The current account will likely keep fluctuating,” said Ha Keon-hyeong, an economist at Shinhan Securities Co. “If the oil price hovers near $90 per barrel, trade deficits will continue and raise questions about economic fundamentals.”

Korean policymakers have signaled a deficit might occur in August, pointing to mounting trade shortfalls. Rising commodity prices, supply-chain snags and slowing demand for semiconductors have been among factors weighing on exports.

The current account is “highly” likely to have returned to a surplus in September as the trade deficit was sharply reduced, the BOK said in a separate statement. Still, high volatility in energy prices and rising demand for overseas travel by Koreans are among factors slowing improvement in the current account, it added.