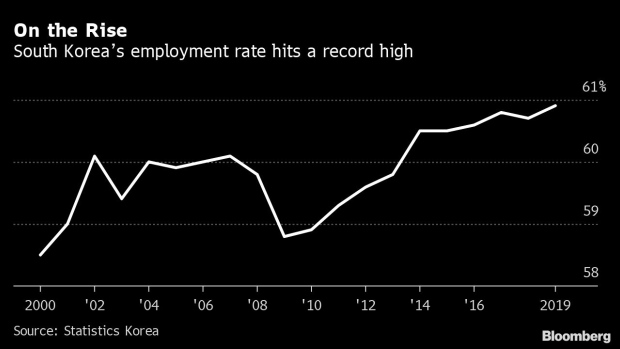 (Bloomberg) -- South Korea’s employment rate hit a record high in 2019, offering President Moon Jae-in evidence that he is delivering on his pledge to provide more jobs, ahead of a parliamentary election.

The employment rate climbed to 60.9% last year, with the help of an increase in part-time work, the statistics office data showed Wednesday. At first glance, the figure appears to contradict the view among Moon’s opponents and some economists that his policies, including a higher minimum wage strategy, have priced people out of work.

That’s a rare slice of good news for Moon as his party faces a mid-term election in April amid questions over his purging of prosecutors looking into corruption and his handling of the economy. Moon’s own term as president lasts until 2022.

Still, the employment growth has largely relied on part-time and elderly workers entering the work force. The low paid and unstable nature of the extra jobs have economists casting doubt on the real strength of the recovery in the labor market and its likely effectiveness in boosting consumption.

“If you just look at the headline figure, the numbers seem to have improved, but a breakdown shows jobs for the core age group and the key manufacturing sector aren’t getting any better,” said An Young-jin, an economist for SK Securities, ahead of the latest release. “Jobs data should be better in 2020 considering the bigger budget and an expected economic recovery, but I doubt whether the improvement will be sustainable enough to support wages and income.”

--With assistance from Sam Kim.

To contact the reporter on this story: Jiyeun Lee in Hong Kong at jlee1029@bloomberg.net

To contact the editor responsible for this story: Paul Jackson at pjackson53@bloomberg.net