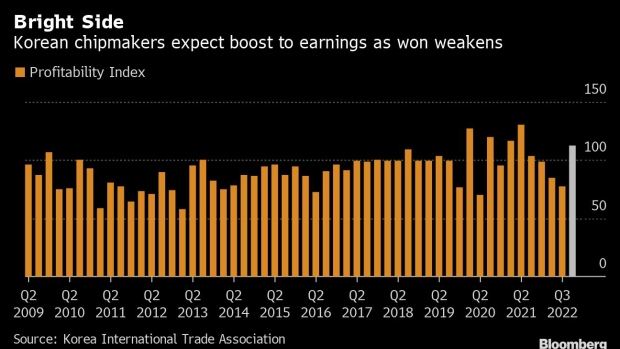 (Bloomberg) -- South Korean chipmakers have turned optimistic on profitability for the first time in more than a year as a rapidly weakening won offers a potential boost from overseas earnings.

The profitability outlook among chip exporters jumped to 112.6 for the current quarter from 77.7 in the previous one, a Korea International Trade Association survey showed Wednesday. Still, the overall business outlook slid to 112 from 114.3 as expectations for orders deteriorated.

A reading between 90 and 110 suggests sentiment remains largely mixed, while anything from 110 indicates optimism.

Anticipation of better balance sheets highlights the windfall export gains from a depreciating currency, even as chipmakers struggle with inflationary pressures that have driven up the cost of raw materials.

“Probably the biggest factor behind the surprising rise is the currency,” said Estella Kim, the KITA researcher who conducted the survey between late August and early September, a period when the won’s weakening intensified.

The won has been Asia’s worst-performing currency after the yen this year, putting pressure on the Bank of Korea to consider another outsized interest-rate increase when it meets next week.

The outlook for chip prices also rose to 138.6 for the fourth quarter from 80.5 for the previous period, according to the KITA survey. That’s a potential sign of the impact of a monthslong retrenchment in production in response to slowing demand.

Total confidence among Korean exporters declined to 84.4 for the final three months of the year from 94.4 in the third quarter, according to the survey, in which some 1,000 companies participated.

Samsung Electronics Co. is expected to report a slowdown in revenue growth and sharp drop in operating earnings for the September quarter on Friday.