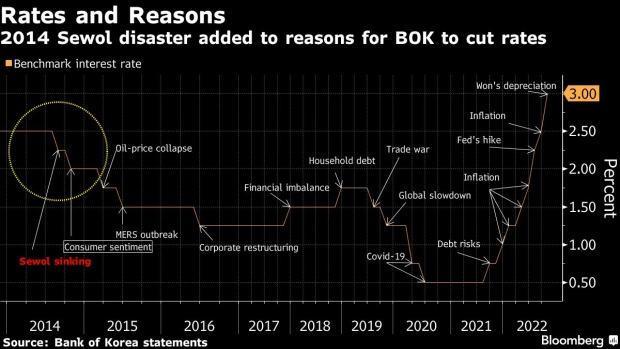 SEOUL, SOUTH KOREA - OCTOBER 31: A man pays tribute for the victims of the Halloween celebration stampede, on the street near the scene on October 31, 2022 in Seoul, South Korea. One hundred and fifty-one people have been reported killed and at least 150 others were injured in a deadly stampede in Seoul's Itaewon district, after huge crowds of people gathered for Halloween parties, according to fire authorities. (Photo by Chung Sung-Jun/Getty Images) , Photographer: Chung Sung-Jun/Getty Images

(Bloomberg) -- A crowd crush in Seoul that killed more than 150 people may result in weaker South Korean household spending, adding to pressures on the economy that range from rising interest rates to a global slowdown.

A string of festivals, concerts and sales promotions have been postponed or scrapped in response to the crowd surge that occurred during Halloween celebrations. President Yoon Suk Yeol apologized and ordered an investigation into the disaster -- Korea’s deadliest since the 2014 Sewol ferry sinking.

The tragedy in Seoul’s central Itaewon neighborhood threatens to damp consumption, a key driver of economic growth that has helped cushion the impact of hotter inflation and deteriorating exports. The disaster may even prompt the Bank of Korea to lean toward a smaller rate hike when it meets later this month, economists said.

“It’s likely to have a larger impact on the economy than the Sewol sinking because it happened right in a busy district in Seoul,” said Ho Woei Chen, an economist at United Overseas Bank Ltd.

She had expected a half-percentage point rate hike at the Nov. 24 meeting, but after the disaster says a quarter-point move “may become more probable.”

Ticket sales for performing arts are already taking a hit, falling more than 30% last Saturday from a week earlier, when the crowd surge happened, according to data from the Korea Performing Arts Box Office Information System. Cinema ticket sales also dropped 20% to the lowest level in half a year, according to the Korean Film Council.

In 2014, private consumption as a component of gross domestic product contracted in the quarter when the ferry sinking occurred. The disaster claimed the lives of more than 300 people including 250 high school students.

It left a mark on Koreans who were shocked and saddened as they watched rescue efforts fail and bodies being retrieved from the water over the course of several weeks.

Consumer confidence declined after the Sewol sinking and didn’t recover for an extended period.

Previous disasters have damped consumption, a key driver of employment in a nation where the services sector is responsible for about two-thirds of jobs.

In August 2014, citing the impact from the Sewol sinking, the BOK lowered its key rate for the first time in more than a year. In October of that year, it delivered a follow-up cut, saying sentiment had yet to recover fully.

The difference now is that the BOK is in the midst of a 15-month tightening cycle and intends to raise rates further to curb inflation and try to keep pace with the Federal Reserve’s sharp hikes.

Still, BOK Governor Rhee Chang-yong said after last month’s half-point increase that some board members were concerned about an economic slowdown and voted for a smaller move. Korea’s economy decelerated last quarter, with trade deficits mounting and the won weakening to the lowest level in more than a decade.

“Consumption will be negatively affected,” said Sung Won Sohn, president of SS Economics and a professor at Loyola Marymount University. “I assume that the Bank of Korea will raise the interest rate but at a slower pace than expected before the tragedy.”

Economists didn’t provide specific estimates of the scale of the hit to consumer confidence or private consumption, saying it was too early to assess.

One economist expected public events to resume toward the end of the year during the holiday season, resulting in a reduced impact on the economy. In fact, consumption may already be weighed down by mounting financial burdens.

“We expect the strong momentum in Korea’s private consumption will fade as inflation and rising rates bite into households’ spending power,” said Sung Eun Jung, an economist at Oxford Economics, who forecasts a quarter-point hike by the BOK on Nov. 24.