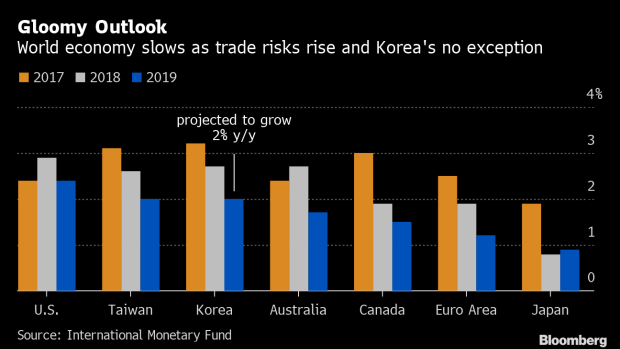 Shipping containers sit in the Busan Port Terminal (BPT) at the Port of Busan in this aerial photograph taken in Busan, South Korea, on Tuesday, July 30, 2019. A trade dispute between South Korea and Japan is threatening to spiral out of control, and both governments want the White House on their side. Photographer: SeongJoon Cho/Bloomberg , Bloomberg

(Bloomberg) -- South Korea’s economy grew at a slower pace in the third quarter, putting one of Asia’s key bellwethers for world trade on track for the smallest expansion since the global financial crisis.

Gross domestic product increased 0.4% from the previous quarter, the Bank of Korea said in a statement, compared with a median estimate from economists for a 0.5% gain. From a year earlier, the economy expanded 2%, as projected in a Bloomberg survey.

“The headwinds to South Korea’s economy remain strong. Global growthwill likely remain tepid in the year ahead -- especially among major trading partners. Even with the tentative trade truce, China’s economy -- the destination of about a quarter of South Korea’s overseas sales -- is due to slow. If hostilities with the U.S. resume, it would likely slide even further.”--Justin Jimenez, Bloomberg Economics

(Updates with extra chart and figures)

To contact the editors responsible for this story: Malcolm Scott at mscott23@bloomberg.net, Paul Jackson, Peter Pae