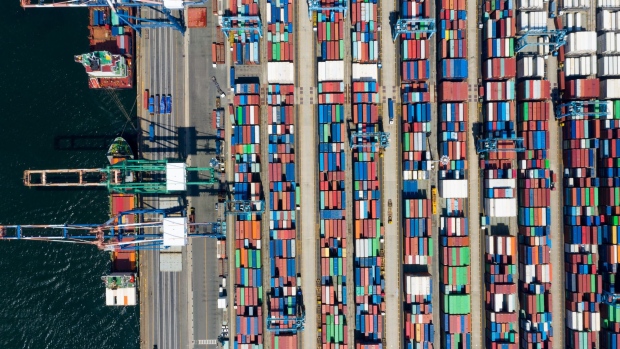 A reachstacker operates at the Sun Kwang Newport Container Terminal (SNCT) in Incheon New Port in Incheon, South Korea, on Tuesday, Feb. 25, 2020. South Korea has seen a sharp increase in coronavirus cases in the past week to more than 1,000 from just dozens, and authorities warned the fallout threatens the nation’s fragile economic recovery. Photographer: SeongJoon Cho/Bloomberg , Bloomberg

(Bloomberg) -- South Korea’s export slump slowed in July, aided by the economic recovery in China and resilient demand for semiconductors.

The contraction was smaller than previous months and comes on the back of China’s accelerating recovery and a further reopening of major markets. The data add further evidence that South Korea’s trade-dependent economy has passed the worst of the pandemic hit, but a full recovery hinges on global virus developments.

South Korea releases its trade report earlier than most countries, helping investors gauge the health of the global economy.