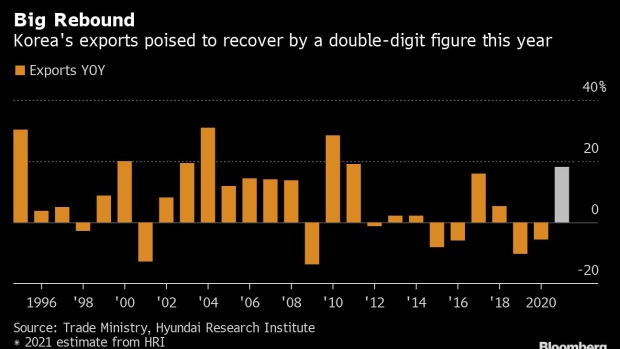 Container ships are docked as shipping containers sit in the Busan Port Terminal (BPT) in this aerial photograph taken in Busan, South Korea, on Tuesday, Oct. 13, 2020. South Korea’s central bank left its key interest rate unchanged on Wednesday amid signs that a resurgence of the coronavirus at home is waning and exports and inflation are picking up. Photographer: SeongJoon Cho/Bloomberg , Bloomberg

(Bloomberg) -- South Korea’s exports last month rose the most in 10 years, boosted by an increase in the number of working days from a year earlier and reflecting a recovery from the effects of the pandemic.

While the effect of the calendar helped increase boost the figures last month, the rise in exports reinforces the view that global commerce is quickly recovering from the pandemic and is fueling a faster-than-expected economic expansion in South Korea.