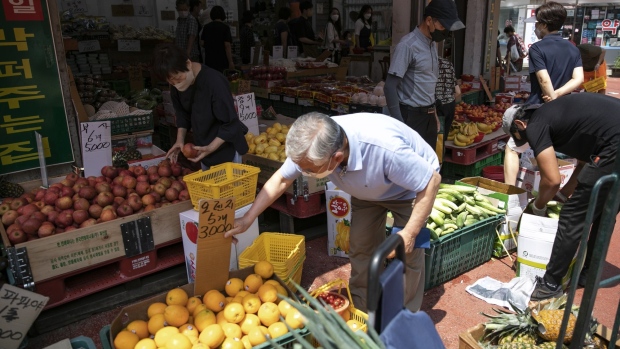 (Bloomberg) -- South Korean inflation slowed a touch in September in a sign that policy tightening is beginning to weigh on demand, a result that’s likely to intensify debate over whether to deliver an outsized interest-rate increase next week.

Consumer prices advanced 5.6% from a year earlier, easing from August’s 5.7% that was also economists’ median estimate, statistics office data showed Wednesday. The Bank of Korea is under pressure to raise rates by a half percentage-point to bridge a gap that’s opened up with the Federal Reserve.

The BOK, which began its tightening cycle in August last year, has fallen behind the Fed as the US hikes aggressively to rein in spiraling inflation. The rate gap has sent the won tumbling to a 13-year low, boosting import costs and threatening to amplify inflation pressures.

The BOK said Wednesday that it sees consumer-price growth holding in a 5%-6% range for a “considerable” time. It highlighted rising pressure in core inflation, which came in at 4.5% in September from a year earlier, slightly above economists’ forecast of 4.4%.

“With core inflation still looking unstable, the central bank isn’t thinking signs are flashing green yet,” said So Jaeyong, an economist at Shinhan Bank who forecasts a 50 basis point hike when the board meets next week. The BOK has two meetings left this year, with the key rate currently standing at 2.5%.

Inflation has been fueled this year by a jump in consumer demand for dining and travel as the grip of the pandemic eased on the economy. Unemployment also remains low as consumption drives service sectors, the biggest generator of jobs in the country.

Slowing exports and high household debt remain risks as the BOK considers picking up the pace of tightening. Business confidence among manufacturers is deteriorating while the consumer outlook remains under threat from higher rates.