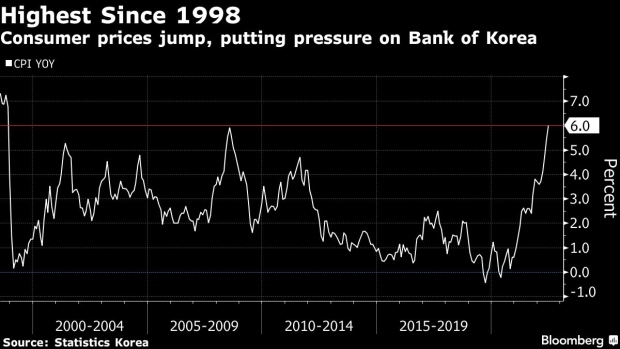 (Bloomberg) -- South Korea’s inflation accelerated to its fastest pace since late 1998 in June, outstripping forecasts again and bolstering the case for the Bank of Korea to go ahead with an outsized interest-rate hike next week.

Consumer prices advanced 6% from a year earlier, quickening from 5.4% in May, the statistics office reported Tuesday. That’s the fastest clip since November 1998 when prices rose 6.8%. Economists had expected the rate to climb 5.9%.

Rapid price gains have been the biggest concern for global policy makers this year, including those at the BOK. The central bank is increasingly expected to carry out a half-percentage-point rate hike next week to tamp down inflationary pressure hurting the economic outlook.

Price growth that pushes up wages to create a feedback cycle of rising costs is a key risk being monitored by the BOK. Korea decided last week to raise its minimum wage next year by 5% and Hyundai Motor Co. workers last week voted to go on a strike to demand higher wages.

The Federal Reserve’s accelerating policy tightening is another factor making it difficult to rein in Korea’s consumer prices as it puts the won under pressure and makes imports more expensive. The Fed is considering whether to go for another 75 basis point rate hike later this month to curb inflation that’s already at a 40-year-high.

The BOK has raised rates five times since August, each by 25 basis points, as it made an early start to the global exit from record stimulus that is among the factors that initially fueled prices.

Challenging the push toward higher rates are Russia’s ongoing war in Ukraine and Covid lockdowns in China. Korean consumers turned pessimistic for the first time in more than a year last month.

Korea’s low unemployment remains a bright spot for the economy. Exports are also continuing to grow despite looming fears of a potential global economic recession.