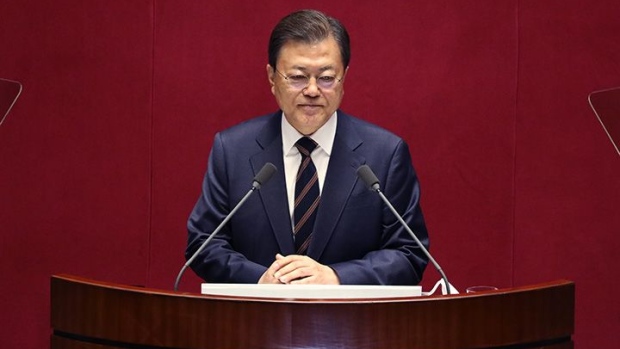 (Bloomberg) -- South Korean President Moon Jae-in met the former rival his party chose to replace him, in an attempt to build a united front before a March election in which their bloc’s control of government hangs in the balance.

Moon, whose single five-year terms ends in 2022, hosted the Democratic Party’s nominee, former Gyeonggi Governor Lee Jae-myung, Tuesday at the presidential Blue House. The cordial reception was a marked difference from four years ago, when the two men battled each other for the party’s nomination in the last presidential election.

“I recall that we competed each other in our last primaries, but after that we worked together to change the administration,” Moon, 68, told to Lee. “After a heated competition, it is important to heal the wounds and become united again.”

Lee, 56, told Moon he would work hard to preserve the president’s policies. Lee is also backing a new plan to install a universal basic wage, warning that without across-the-board income support to address inequality, the stability of the country’s economy could be threatened.

Polling shows that Lee is leading the race for the presidency ahead of the two top candidates from the main opposition People Power Party, which holds its primary Nov. 5. Its main candidates are Yoon Seok-youl, a former top prosecutor whose battles with Moon made him one of the country’s most popular figures, and Hong Joon-pyo, another former candidate from the 2017 race.

While a sitting president is required to be politically neutral before an election, a united front could help firm up party support for Lee, who comes from a different faction and was branded as the “main enemy” by Moon’s supporters when they ran against each other. Some party members opposed to Lee have filed an injunction at the Seoul Southern District Court trying to overturn the primary election result.

On a separate legal front, prosecutors are looking into an urban development deal in Seongnam, a city where Lee served as mayor, raiding the offices of the current office holder last week. Lee has denied any link or wrongdoing in the scandal that took place while he was in power and led to a small private asset management company and its affiliates reaping enormous profits on their investment in a city development project.

Urban real estate prices will be a key issue in the presidential race. Since Moon took office in May 2017, the average price of an apartment in Seoul has soared by about 90% and the jump in urban housing prices played a role in the drubbing his Democratic Party suffered in mayoral elections in the capital and in Busan this spring.