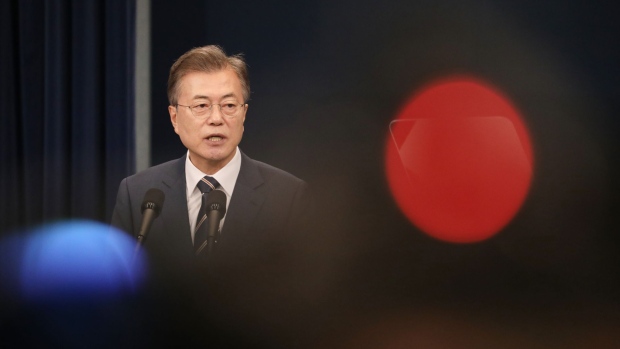 (Bloomberg) -- South Korea’s export-dependent economy is facing a “grave situation” as the U.S.-China trade war and the spread of trade protectionism heap pressure on the global economy, President Moon Jae-in said in a parliament speech Tuesday.

Moon’s speech comes after the latest South Korean export data point to another dismal month for global trade. An escalation of tariffs from the trade war and ensuing uncertainty have hurt exports, investment and consumption in South Korea, shaving 0.4 percentage point off its economicgrowth this year, according to central bank estimates.

Moon’s approval rating has been sliding in recent weeks, chiefly due to a scandal related to a close political ally but also due to the country’s weak economic performance. The pace of economic growth has been trending downward since Moon took office in 2017, and is expected to slow to around 2% this year, the weakest since the global financial crisis.

In Tuesday’s speech, Moon urged parliament to approve the 2020 budget proposal, which would raise spending by 9.3% from this year’s plan. South Korea’s annual budgets typically have faced political wrangling in parliament, and tend to be approved close to the deadline after some amendments.

To contact the reporter on this story: Jiyeun Lee in Hong Kong at jlee1029@bloomberg.net