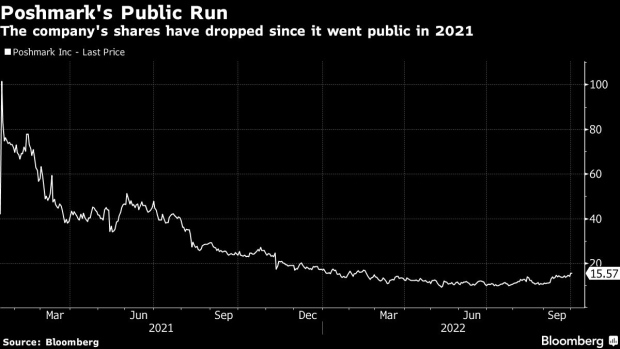 The Poshmark Inc. website on a laptop computer arranged in the Brooklyn Borough of New York, U.S., on Tuesday, Jan. 19, 2021. Poshmark Inc., the online marketplace for second-hand goods, rose 142% in its trading debut after raising $277 million in an initial public offering priced above the marketed range. , Bloomberg

(Bloomberg) -- Shares of South Korean internet giant Naver Corp. fell the most in seven years after the company agreed to buy online secondhand-fashion marketplace Poshmark Inc. in a deal valued at about $1.2 billion.

Naver will buy all of Poshmark’s shares for $17.90 each, a 15% premium to Monday’s closing price. After the deal is completed, Poshmark would become a standalone US subsidiary of Naver, and it would continue to be led by Chief Executive Officer Manish Chandra and his management team, the companies said.

Poshmark climbed 13% at 9:44 a.m. New York time on Tuesday. The stock had lost almost two-thirds of its value since debuting in early 2021 in part due to sluggish growth overseas and increasing competition in the resale market.

“I think the market was surprised at the size of the deal,” Naver Chief Executive Officer Choi Soo-Yeon said in an interview, noting that this is the company’s biggest acquisition to date and first foray into Silicon Valley.

Naver shares sank 8.8% in Seoul. Citigroup Inc. analysts had earlier downgraded the stock to a sell rating, saying its price-to-earnings ratio was hard to justify when compared to other internet firms.

With the transaction, Poshmark will get access to Naver’s extensive e-commerce experience. Naver is one of the leading internet players in South Korea, combining search and cloud services with online shopping. The deal is aimed at creating a global player in online fashion, using the target’s social shopping technology.

“Poshmark will become a foothold in the North America market to expand our business in the region,” Choi said. “We will try out our technology through Poshmark’s services popular among the younger generation.”

Naver obtains a US brand that has grown rapidly in recent years. Poshmark has a community of more than 80 million registered users, across 90% of zip codes in the US, the companies said.

Poshmark, which Chandra founded in 2011, is an online marketplace where users post photos of items they are selling and set their own prices, then ship goods once they are purchased. The company, which doesn’t hold any inventory, gets paid when users make a sale.

The boards of both companies have approved the deal, which is expected to close by the first quarter of 2023, according to the statement.

Poshmark’s stock drop since going public isn’t unique among online resellers. Shares of RealReal Inc. are down more than 90% from its 2019 IPO, while ThredUp Inc., which went public two months after Poshmark, has fallen more than 80%.

“We don’t think they’ll get a better deal than this,” Wedbush Securities analyst Tom Nikic said of Poshmark in a research note Tuesday. He said RealReal and ThredUp look cheap by comparison and the deal “may have created a ‘floor’ for this beaten-down group.”

RealReal climbed 22% in New York trading, while ThredUp rose as much as 19%.