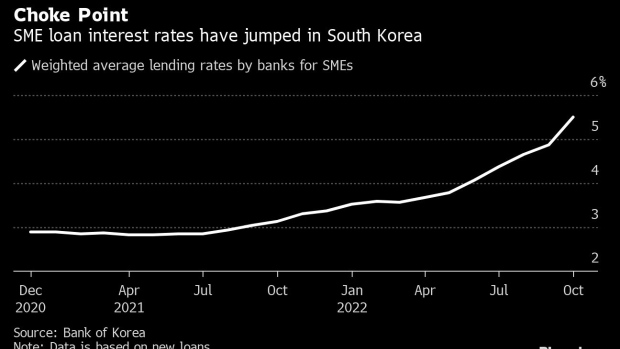 (Bloomberg) -- Rate hikes by the US Federal Reserve are significantly increasing the cost of capital for South Korea’s startups, elevating the chance many may face bankruptcy in coming months, according to the nation’s Minister for SMEs and Startups.

“US rate increases are too fast and too violent and we are puzzled,” Lee Young said in an interview in Seoul. “The US is raising rates just for their own interest without any ample warning but it’s rattling global financial markets.”

Big name investors have started to pull money out of risky assets and emerging market countries amid waning economic expansion. South Korea raised its key policy rate by 0.25% last week and lowered its forecast for growth to 1.7% for 2023.

About half of 200 startup owners in Korea surveyed in September said they’ve shifted their capital raising plans in light of rising interest rates, according to a Nov. 22 report by Startup Alliance, a local community of early-stage companies.

“Investors may want to check how startups are managing cash and whether they’re generating real profits rather than looking at their future visions,” said Bo-Guen Choi, the chief executive officer of AlpenRoute Investment Co., a Seoul-based hedge fund that invests in startups.

South Korea has created a fund of around 8 trillion won ($6.1 billion) to support local unicorns considering less than 2% of startups in the nation get investment from venture capital firms a year, Lee said.

For local small- and medium-sized enterprises (SMEs) in general, South Korea is planning to offer around $40 billion in financial support, she said. The average lending rate for Korean SMEs jumped to 5.49% as of the end of October from 2.89% in December 2020, according to data from the Bank of Korea.

Korea’s SMEs and Startups Ministry, through its network of local business people, is also looking for signals of an impending economic crisis, Lee said.

“The biggest agenda for Korean companies next year is whether they can survive or not,” Lee said. “For instance, if the retail industry is getting weak, it signals other sectors are already struggling.”

--With assistance from Kyungji Cho.