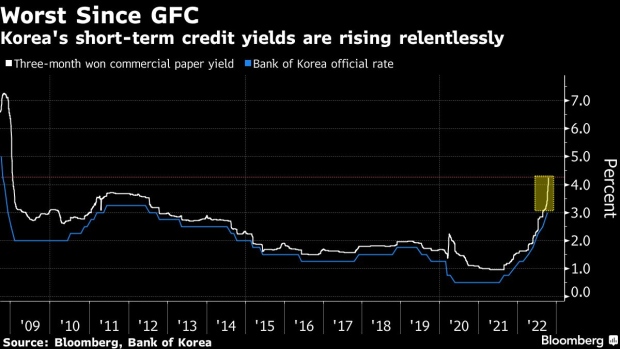 Morning commuters cross a road in the Gwanghwamun area of Seoul, South Korea, on Monday, April 18, 2022. Starting Monday, there is no social distancing rules except for wearing masks, culminating the country’s drive to “return lives to normal” with a strategy that has stood out for preventing an economic downturn while keeping the death rate relatively low. Photographer: Woohae Cho/Bloomberg , Bloomberg

(Bloomberg) -- South Korea pledged at least 50 trillion won ($34.7 billion) in support for credit markets that have been strained by rising interest rates, stepping in to reduce the risk of defaults weighing on the economy.

South Korea will expand and operate its “liquidity supply program” to prevent a credit squeeze roiling corporate bonds and other short-term money markets, Finance Minister Choo Kyung-ho said on Sunday in a statement, after a meeting with Bank of Korea Governor Rhee Chang-yong and other senior policymakers.

The pledge marks one of the biggest rounds of financial support for markets since Korea expanded its emergency funds to around 100 trillion won to protect businesses at the onset of the pandemic.

“The government and the BOK agree the current market situation is very grave,” Choo said. “We will respond to market anxiety by mobilizing all available policy measures if needed.”

Sunday’s meeting underscored the urgency of bolstering confidence in the market after a rare default on commercial paper by the developer of Legoland Korea theme park. The province that houses the park has said it would repay the project’s 205 billion won of commercial paper repackaging loans.

The default added to market unease spurred by rapid interest-rate hikes as the BOK followed the Federal Reserve, as well as the won’s depreciation and a rising trade deficit.

The new support package is a “micro-measure” aimed at boosting confidence in commercial paper markets and does not mean the conditions for monetary policy have changed, Rhee told reporters, according to a recording provided by the central bank.

Yields on Korean commercial paper have skyrocketed to a level last seen during the global financial crisis while sales of new won bonds plunged 90% this month, according to Bloomberg-compiled data going back to 1999.

--With assistance from Kyungji Cho.

(Updates with results of meeting)