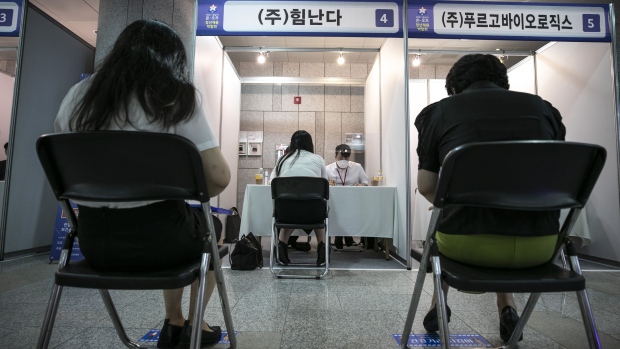 A job seeker participates in an interview at a job fair for youths organized by the Seongnam City government at Pangyo Techno Valley in Seongnam, South Korea, on Tuesday, July 6, 2021. South Korea came closer to recovering pre-pandemic employment as more people ventured out looking for jobs after the economy expanded at a faster pace than previously thought. , Bloomberg

(Bloomberg) -- South Korea’s unemployment rate fell unexpectedly in August, defying economists’ expectations for a rise amid a surge in infections and tighter curbs.

The unemployment rate declined to 2.8% from 3.3% in July, the statistics office said Wednesday. Economists had expected an increase to 3.5%. The economy added 518,000 positions from a year earlier, a sixth straight month of gains.

Government officials had expected job market indicators to deteriorate in August, reflecting a virus wave that put Seoul under a semi-lockdown in mid-July. With the jobless rate coming in below market consensus for a second month, the reasons behind the low readings will be scrutinized by the Bank of Korea as it mulls the timing of a second interest-rate hike.

The economy has largely held up during the latest outbreak, with exports and investment powering ahead and the damage to consumption smaller than expected. That allowed the BOK to proceed with a rate hike in August, with strong signals that policy normalization will continue to counter risks from financial imbalances.

The job market may be receiving support from emergency handouts to most households. The government is hoping the extra cash will be funneled to small mom-and-pop stores hit by Covid restrictions.

The fully-vaccinated share of the population has also reached 40%, allowing a targeted easing of virus restrictions that should support the services industry.