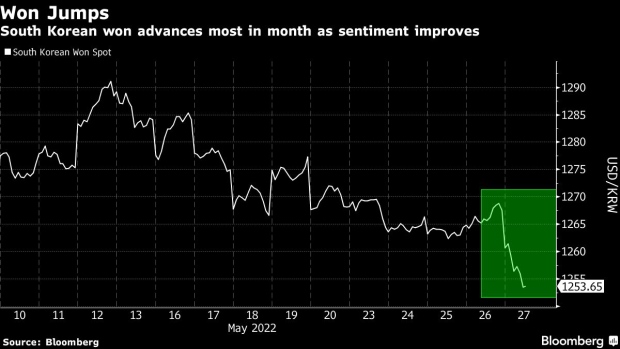 The currency rose as much as 1.2% to 1,252.80 per dollar on Friday, the most since April 29. Risk assets rallied tracking the rebound on Wall Street and better-than-expected earnings at Chinese technology companies. The Kospi index of Korean shares rose 0.9% after Thursday’s drop.

Won also received a boost from hawkish comments from the Bank of Korea Governor Rhee Chang-yong said on Thursday. He had said that the central bank must prioritize tackling inflation over growth for the time being.

The won still remains under pressure due to elevated oil prices and a slowing Chinese economy. It’s fallen about 5% versus the dollar this year. However, analysts say it could be bottoming out as the economy improves.