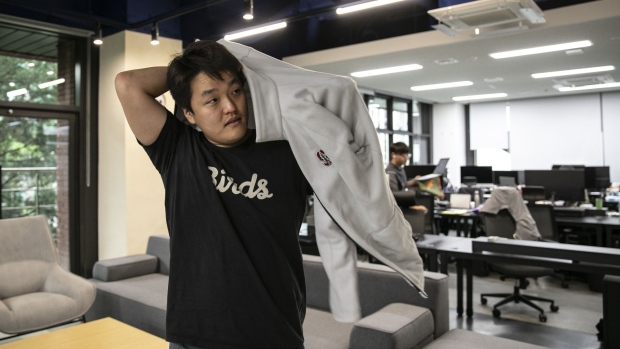 Do Kwon, co-founder and chief executive officer of Terraform Labs, leaves the company's office in Seoul, South Korea, on Thursday, April 14, 2022. Kwon is counting on the oldest cryptocurrency as a backstop for his stablecoin, which some critics liken to a ginormous Ponzi scheme. , Bloomberg

(Bloomberg) -- Some light has been shed on crypto fugitive Do Kwon’s travel after South Korea sought his arrest and his location became a mystery.

Prosecutors in Seoul said in a text message late Thursday that a report Kwon had left Singapore and flown to Dubai likely as a stopover to destinations unknown “was not false.”

Kwon’s Terraform Labs crypto project suffered a $60 billion implosion in May, convulsing the digital-asset sector and saddling investors with losses. He faces charges in South Korea, including accusations of breaching capital-markets law.

Kwon, who has denied wrongdoing, refrained from revealing his whereabouts in a podcast earlier this week, citing threats he’s received.

His location became unclear in September after officials said he was no longer in Singapore, where his project had a base. South Korea says Kwon is the subject of an Interpol red notice.

A Terraform Labs spokesperson declined to comment on his movements. Kwon didn’t reply to a request for comment.